A recent article in Reuters reports that physical delivery premiums remain at elevated levels in Europe, quoting a range of $350-380 per metric ton for duty-paid metal in a warehouse in Rotterdam, but Reuters attributes the high premiums, in part, due to the strength of the European recovery.

While we don’t doubt the level of the premiums, we must ask, has this anything at all to do with the strength of European economies? An article this week in the Telegraph quoted Q1 2014 GDP figures just released from across the EU to paint a rather dire picture of most of the countries in the union’s performance.

True, Germany, the largest and most robust economy, did relatively well growing 0.8% in the first quarter, better than anticipated and double the pace of the last quarter of 2013. Better still, most of this growth came from internal consumption, not exports of which the country has been said to rely too heavily on in recent years.

Exports, though, have in part suffered from the sickly state of the rest of Europe as three of the euro-zone’s five largest economies contracted or stagnated in the first three months of the year as the region struggles against high unemployment, (largely German imposed) austerity and a backdrop of worries over Ukraine. 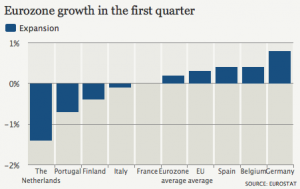 Dragging Down the Euro-Zone

The Telegraph reports the Netherlands suffered the biggest contraction in the first quarter as the economy there shrank by 1.4% on a quarter-on-quarter basis, down from the 1% expansion recorded in the final three months of last year.

France stagnated while the Italian economy contracted by 0.1%. Estonia, Portugal, Cyprus and Finland also recorded a fall in GDP with Finland shrinking by 0.4% in the first quarter, following a contraction of the same magnitude in the final three months of last year, putting the country now in a technical recession. Meanwhile, unemployment across the euro-zone is running at 11.8% and exceptionally low inflation remains in what the European Central Bank calls the danger zone.

What IS Driving Aluminum Demand?

So if industrial activity is not driving aluminum demand and driving up premiums by 30% since the start of the year… what is?

In large part, it seems our old friend the stock and finance trade. It’s all very well blaming load-out queues but in reality only Vlissingen has exceptionally long queues, currently some 748 days according to Reuters, so if the market is in surplus then premiums would come down with direct metal supplies from mills.

The reality is the market is reasonably tight, and the reason isn’t hard to see. The Contango on the LME, the difference between spot and forward prices, has surged some 50% over the last month. Aluminum’s 3-month price is trading at more than a $43/ton premium to cash compared to just $30.50/ton in early April, encouraging banks and traders to play the forward price curve.

That “demand” is competing with end-users for supply although whether it will drive premiums higher later, as some traders commenting to Reuters suggest, remains to be seen. The LME price is not reflecting physical demand for metal as it should, so as the only expression of true demand should the market tighten further, higher premiums are a distinct possibility.