Crunch time may finally be approaching for many Chinese aluminum smelters according to a number of recent articles reporting falling prices amid continued overcapacity in the world’s largest nation. Spot aluminum traded below 13,000 yuan ($2,100) per metric ton this week in China, the price includes local tax, this is the lowest since mid-2009.

Reports that some 400,000-500,000 tons of production capacity had already closed down so far this year can be misleading. While older, less efficient and higher-cost capacity is continually being closed in China, new and lower-cost plants are still under construction. Nevertheless, reports that the idle capacity could expand to 2 million tons by the second half of the year have been further extended, according to the China News, to a figure of 3 million tons or 10% of capacity. 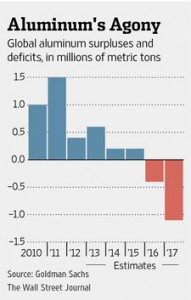 Goldman Sachs is quoted in the WSJ predicting aluminum demand will increase by 7.6% this year to 55.35 million tons. That would cut the expected annual surplus to 198,000 metric tons from the bank’s estimate of 546,000 tons for last year.

Smelter closures are expected to help reduce the surplus in China and the rest of the world, although to date China’s surpluses have had more of a psychological than actual impact on global oversupply as primary aluminum is not exported from the country due to high export tariff barriers.

In reality, though, overcapacity in the rest of the world may already be a thing of the past as the financial stock and finance trades continue to soak up metal and capacity is gradually idled. Further new capacity is unlikely to be added in the Middle East where much of the new investment has been made in recent years and, the WSJ added, that UC Rusal has shelved plans to build a high-tech smelter in Siberia that would have created 3,000 jobs – one can imagine that didn’t go down well with the local state government.

The world’s largest aluminum producer said it would put on hold its Taishet smelter in Siberia’s Irukutsh area, with an annual capacity of 750,000 metric tons, citing unfavorable market conditions and an effort to rationalize capacity as it struggles with persistent losses and a mountain of debt.

The aluminum market could turn next year. So far, shortages have been reflected almost solely in physical delivery premiums, but if the market continues to tighten sooner or later the underlying LME price will have to reflect that demand – if stock draw-downs become a meaningful feature.

Where is the Warehoused Aluminum?

The two largest warehouse locations – Detroit and Vlissingen – continue to have massive queues that, for all intents and purposes, lock up half the 5 million tons of inventory behind year-plus delivery delays but other locations are not similarly hampered and have metal that is relatively accessible.

The problem for consumers or traders wanting access to their aluminum is they don’t know when they buy a warrant where it is located. There is a 50:50 chance it could be behind a queue. A swap to a non-queue warehouse involves a hefty and negotiated premium which may encourage US buyers to try the CME Group where metal access should not be an issue, at least within its limited US locations. Meanwhile, all eyes will be following China’s efforts to balance its capacity, it’s highly unlikely to achieve this anytime soon with the industry in such a state of flux. As home to half the world’s production capacity, what happens there has an impact on consumers everywhere, sooner or later.

PREVIOUS POST:
Photovoltaic Solar Import Duties: Stop Me Before I Save Your Environment!
NEXT POST:
New Benchmark for the North American Aluminum Industry