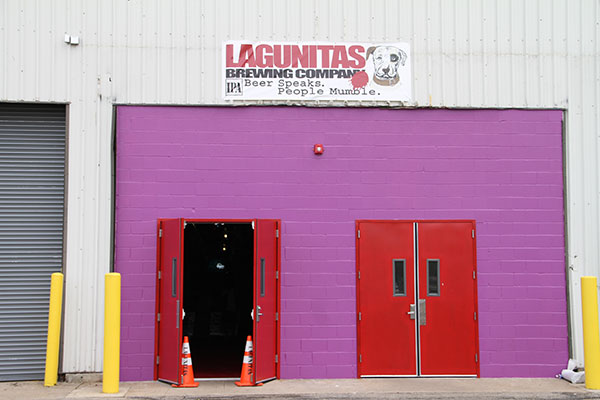 If you enter, the history of metal distribution in Chicago and a wild beer circus both await you…

On a gray warehouse nearest the intersection of South Rockwell and West 17th Streets on the southwest side of Chicago, between loading door numbers 40 and 42, hangs a small white fabric sign with a picture of a dog and a red splotch.

Instead of steel plate, stainless coil, or aluminum sheet being shipped out of the corrugated metal doors of this warehouse – once part of Ryerson Inc.’s West Plant – hipsters smoking, a group of Asian tourists and burly folks wearing ballcaps and work-shirts all crossed paths one recent afternoon as they walked in and out of a pair of bright red doors.

For some, this is no more than a nondescript façade in the middle of a weedy, fenced-in parking lot cut in half by a closed-off street; in other words, somewhere no one would wander or stumble upon if they knew better.

But for us, this is Ground Zero of the histories of modern metal and craft beer coming together.

It Takes a Visionary…

In 1646, two brothers named Marten and Adriaen Reyerszen left Amsterdam and sailed to America. The Reyerszens (whose last name became Ryerson on this side of the pond) bought farmland on Long Island in New York, near Brooklyn.

Nearly two centuries later, Marten’s great-great-grandson, an agent for a Pennsylvania iron master, arrived in Chicago on Nov. 1, 1842, and founded and built his own iron store in 1844. 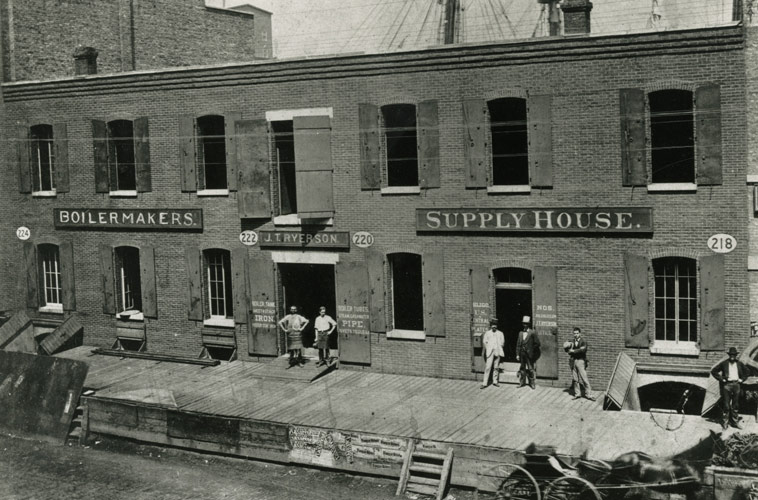 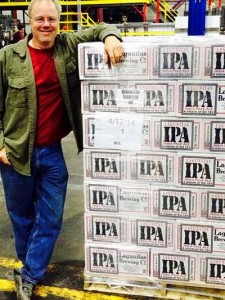 Cut to the early 1980s, when a good-natured stoner who was born in the Rogers Park neighborhood of Chicago and raised in nearby Arlington Heights dropped out of Northern Illinois University to play in a reggae band. He moved to Northern California, where he made his first batch of home-brewed beer in the early 90s after seeing how much fun his brother was having doing the same thing.

The rest, as they say, was history.

Joseph T. Ryerson and Tony Magee have a lot in common.

Ryerson, founder of what is now Ryerson Inc., a metals processor and distributor with $3+ billion in sales, and Magee, founder of Lagunitas Brewing Company, now the fifth-largest craft brewer in the country, can both claim the City of Broad Shoulders as their own.

Shortly after Ryerson built his iron store, in 1852 he built a dock 80 feet long by 55 feet wide “on the Chicago River so that consignments of iron arriving on ships from Lake Michigan” could be unloaded at the store, according to the company’s official history.

Now, in 2014, Magee is also taking advantage of Lake Michigan – not for transportation, but as the primary raw material for brewing his beer. (For a more detailed lowdown on Lagunitas’s liquid gold, check out my friend Sean Cooley’s take over at Thrillist; the Chicago taproom finally opens to the public tomorrow.)

And Magee just happens to be making magic with Lake Michigan water right in Ryerson’s old backyard: a 300,000-square-foot production facility in the southwestern-most warehouse on the massive campus plant in North Lawndale on the city’s southwest side. Ryerson built the first building of the plant, which still stands a few hundred feet away, just over a century ago.

16th and Rockwell: The Origin Story

Ryerson’s business survived the Great Chicago Fire of 1871 (after which he declared, “I am ready for the fight against misfortune, and I trust my old friends and customers will stand by me”), and as railroads continued booming, so did the demand for boilermakers, and hence for his iron, steel and machinery products.

After Ford Motor Co. began coming to Ryerson as a steel supplier for large orders just after the turn of the century, the company purchased property at 16th and Rockwell, southwest of the Loop and close to a railroad hub, in 1908, and built up facilities and warehousing that spanned 19 acres by 1922 – one of the largest iron and steel warehouses in the world.

Here’s how it was described in a volume of “Engineering World: A Journal of Engineering and Construction,” published in 1922:

“Warehouse after warehouse covers the several large blocks of the Ryerson Chicago plant at 16th and Rockwell streets, where almost every kind of finished steel and iron is to be found. There is iron and steel for building construction, bridges, railroad shops, boiler shops, sheet metal shops and for factories manufacturing metal products. The company does not fabricate any of its material but receives its iron and steel in standard lengths and other dimensions and cut it to size for customers.”

(The latter, of course, has changed as Ryerson added more services than simply cutting.) 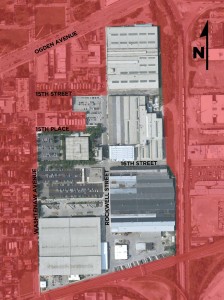 The campus continued to expand over the years, as Ryerson added volume and different types of metals (stainless, aluminum, titanium and numerous alloys by the 1960s), and eventually comprised nine buildings on more than 48 acres, representing more than a million square feet of wide-open interior space with ceilings topping out at 50 feet and higher, according to the Chicago Reader’s Deanna Isaacs. The actual total estimate clocks in closer to 1.5 million square feet.

The 1922 description above, however, no longer holds true for anyone walking through the campus these days, as I did myself just last week.

Continued in Part Two – how exactly did Lagunitas get the space? Hint: It was fun.