The market is tighter at the moment than we initially expected which supports prices. However, at the end of July the LME rule change ban will be challenged and, if successful, will likely increase supply to the market noticeably as 2 million tons of inventory in Vlisslingen, Netherlands and 1.3 million tons in Detroit are still bottlenecked behind long LME load-out queues.

While the premium/price reaction is uncertain, we would expect the excessive premium to melt. We also think that economics have now reached a level where restart risk becomes striking. Medium-term, we note that the UK and US seem to be heading toward a rising interest rate environment which will make the carrying trade more difficult.

We wrote earlier this week about the key dynamics buffeting the aluminum market. On the whole, they have been positive and prices have risen strongly, up 14% this year, with more rises possible in the short term. But as we mentioned in that article, in the medium term not all the stars are aligned aluminum’s way and for a metal with so much global inventory, the medium term outlook’s rise may not be as sustainable as that of short term.

The reasons for aluminum’s price strength this year is not hard to see. Smelter capacity cuts, so long called for, were gradually implemented last year into 2014. According to HSBC, voluntary output cuts reached close to 2.8 million tons per annum (since November 2011) outside China and 3.2 mt/a (since January 2013) in China have brought the physical market into deficit.

The World Bureau of Metal Statistics agrees, saying in its latest report the calculated market deficit for primary aluminum for January to May 2014 was 99 kilotons, which follows a surplus of 1,057 kt recorded for the whole of 2013.

Production in the European Union’s EU27 fell by 4.3% and NAFTA output fell by 7.3%. Whilst at the same time, demand in the EU27 was 105 kt higher than the comparable 2013 total. Global demand rose by 5.2% during January to May compared with the levels recorded one year previously. Shrinking output (at least outside of China) and rising demand are what has swung the market from surplus to deficit and driven up prices. 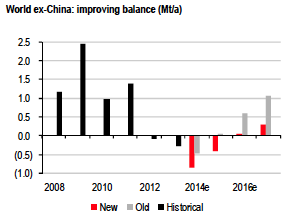 Many wondered why the strong physical delivery premium was not being translated into a rising LME price but in hindsight it appears it was a matter of time, delivery delays in getting metal out of LME warehouses had caused a sharp disconnect between the real market price and the LME. Given time and the changes likely to be implemented next year, that now appears to be gradually righting itself. Physical delivery premiums remain high but HSBC is not alone in predicting the physical premiums will begin to shrink, and shrink rapidly if the end of July legal review moves forward in London as hoped by the LME. Meanwhile the rising LME price is finally responding to real world demand in a way that it wasn’t earlier in the year. 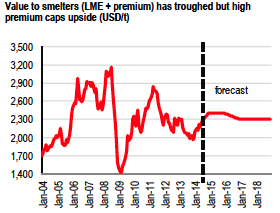 Media reports that global inventories are falling can be misleading. Certainly the LME is down somewhat. What may be more important is that it has massive quantities of metal waiting in exit queues to be loaded out but global stocks held in the four exchanges in London, Shanghai, the US and Tokyo were 5.584 million tons at the end of May 2014,

That is  6.7 kt above the December 2013 total. Meanwhile, global producer stocks at the end of May 2014 were 1.261 million tons. That is 92 kt above the previous year’s close. Although, it is widely believed the metal in exit queues is simply heading for cheaper off-market storage locations, in the medium term the US and UK are heading for a higher interest rate environment that will make the stock and finance trade more challenging.

This will increase the probability that some of these stocks will come back to the market next year. Indeed, HSBC is predicting an increased market deficit in 2014/2015 on higher underlying demand, but with the market reverting to a modest surplus in 2016/2017 as new supply comes online. Outside China, the bank is predicting a deficit of 856kt for 2014 and 421kt for 2015, but a sharp rise in price could easily see up to a million tons of idled capacity come back into the market stream wiping out that deficit. As a result, while HSBC sees prices holding broadly above $2,000/ton up to the end of this year they do not see a continued rising trend in 2015, suggesting an average of $2,065/ton for 2015, naturally with some volatility either side of the line, as their most probable scenario.

PREVIOUS POST:
The Posco-Mesco Finex Steel Plant Deal: Will It Happen?
NEXT POST:
The Indicators Behind Aluminum’s Bull Rush Don’t All Point North