The aluminum cash-to-three-month contango on the LME remained pretty steady in the $40 to $50 range between July of last year and April, but since then there has been a marked surge in volatility that has left consumers puzzled as to what will happen next.

First, physical delivery premiums soared in January from $250/ton last year to $400/ton this year. Most couldn’t see the logic in this and expected them to fall back but, if anything, they have gotten worse with Q3 premiums remaining above $400 in both Europe and Asia

The third trend has been the rising LME price. Up from the doldrums of $1,750 earlier this year to over $2,000 per ton this week. Although some perennial aluminum bulls have been calling for the price to rise, the recent surge has caught many consumers by surprise and considerable argument is going on about whether it can be maintained with nearly 5 million tons of stock in the LME system.

That metal is currently contained behind the barrier of Detroit and Vlissengen’s exit queues, but that could change if load-out rates are increased following the legal review, or if a rise in interest rates or a flattening of the forward price curve make rolling profits over into new finance deals unattractive.

That brings us to the final factor: The forward spread, the difference between cash and 3 months price, has narrowed recently from a solid and consistent $40-50/ton to just $16.75/ton this week. This isn’t unprecedented as this graph from ThomsonReuters shows. 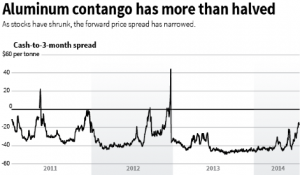 In fact, a spike into “backwardation” (when cash is at a premium to 3 months) is a fairly regular occurrence every now and then as the graph shows. No one is predicting the market will go into a prolonged backwardation now but it is interesting that the last time it peaked, early 2012, coincided with another unusual distortion in the market, a narrowing of the difference between the LME and the Shanghai Futures Exchange aluminum quotations.

As a separate article points out, the premium of SHFE over LME futures has narrowed from $515.94/ton at the end of last year to just $226.81 this week. In early 2012, LME futures rallied while SHFE contracts were flat, taking the gap to $219.18 a ton on March 1 of that year. In the next six months, LME futures slid almost 22%, while SHFE prices dropped only 6%.

Some are speculating that with the SHFE essentially capped by massive increases in production capacity this year, the SHFE has very limited upside. Chinese National Bureau of Statistics data shows June production of 1.95 million tons, up 4.8% from May, and year-to-date output of 11.54 million tons, up 7.4% from the same period in 2013. If that is the case, so the logic goes, sooner or later the LME will fall back to its traditional position. Meaning there’s more downside potential to the LME than upside to the SHFE.

Aluminum certainly has stronger fundamentals now than it did 6-12 months ago. A follow up article will explore the medium-term prospects in more detail but while the current rise appears to have the makings of a bull run we would be cautious. There are still headwinds in the form of massive inventory, much of the idled production could be readily returned to full use and there is a shakier landscape for the stock and finance trade than there has been for several years. A sustained rise above $2,000/ton would require many of the dynamics driving the market to align favorably, and while we can almost guarantee continued volatility, for them all to point in the same direction over the longer term seems unlikely.