The lead market was in deficit by 41,000 tons in January to April 2014, according to the World Bureau of Metal Statistics, following from a deficit of 276,000 tons recorded in all of 2013. Total stocks at the end of April were 35,000 tons lower than at the end of 2013 even though LME inventory is roughly at the same level as the start of the year after a sharp uptick in inflows at the end of last month. 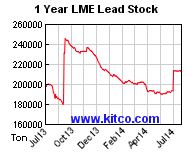 But for a market in deficit and driven on the demand side by many of the same drivers as, say, Copper and Zinc – Chinese demand – it has failed to ride the same recovery since the Spring. According to the FT, factory activity in China expanded at the fastest rate in 18 months, along with a recovery in GDP growth as a result of the mini stimuli at both national and state levels, metals have, on the whole, responded strongly.

Copper has risen for the fifth week out of six, to $7,133 a ton on the LME, taking it to an 11% rise since mid-March, while Zinc rose 4% last week to take it to a 16% gain so far this year. Nickel is the stand out performer up 38% this year but much of that can be credited to Indonesia’s ban on ore exports.

By comparison, before the pick up last week, lead’s rise has been more muted. Certainly up from the trough it briefly touched in March but, for a metal in deficit, not exactly barnstorming. Part of that may be due to the demand side.

Global demand was down 80,000 tons while demand in China, responsible for some 41% of global consumption, was down 62,400 tons, again quoting WBMS numbers. What could consumers expect going forward? Steel production is under pressure in China, although elsewhere it is making modest recoveries.

Of lead’s steel-related applications in construction, automotive and consumer goods, only automotive is doing particularly well. The largest demand source is from batteries, both new builds and replacement, and hence demand tends to be relatively steady with seasonal variations between Europe/North America and Asia.

Constraints in the demand/supply balance come more from the supply side than surges in demand and here lead has some issues. Often co-produced with zinc, mine supply is at risk in the second half of this decade with old mines being closed and new mines coming on-stream more slowly than planned.

Upward price pressure is therefore more likely to come from a rising deficit than a spike in demand. Certainly that is the expectation for zinc, lead’s sister metal wherein many of the same drivers have been applying upward price pressure this year. It may be for lead that it is just a matter of time.