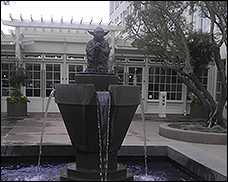 A short time ago, on a lakefront not so far away…

… George Lucas named the architects for his Museum of Narrative Art, better known as the Star Wars Museum, in Chicago yesterday. Lucas chose Ma Yansong, founder of the Beijing firm MAD Architects to design the building set for Chicago’s lakefront and Chicago’s own Jeanne Gang, who heads Studio Gang Architects, to design the landscape around it and a pedestrian bridge that will link the museum campus to Northerly Island, a nearby concert venue on a peninsula that juts into Lake Michigan.

Gang and Yansong are certified ‘starchitects’ whose designs include Aqua and the Absolute World Towers in Mississauga, Ont., Canada. Based on the curvy, difficult-to-build works in their portfolios, both would be adept at creating a Kamino or Bespin-influenced look for the museum and bridge. I, for one, was hoping for a more spare, boxy, Corellian design that would say to the visitor “she may not look like much, kid, but she’s got it where it counts.”

Still, by hiring Gang and Yansong, Lucas signaled that he’s committed to making the new museum a bold presence in a Museum Campus that, until 2001, was known for monuments in stone steeped in the most staid and traditional designs.

When Soldier Field was reconstructed, however, a little bit of modernity invaded the museum campus. Many decry its seating bowl as a “flying saucer,” but if Gang and Yansong go that way there’ll be TWO spaceships next to the Field Museum, Adler Planetarium and Shedd Aquarium. High design could also assuage the preservationists and other professional belly-achers who are already opposing the plan for the museum that Mayor Rahm Emanuel had to fight like a snub fighter over Yavin 4 to defeat Lucas’ home city, San Francisco, to get. 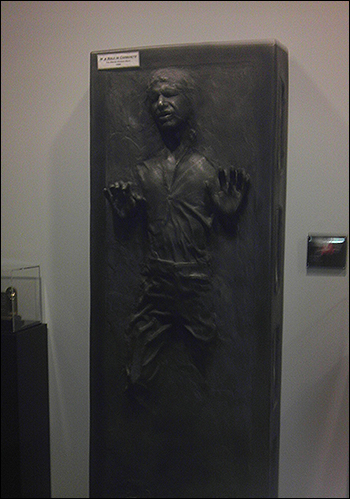 San Francisco likes Captain Solo where he is.

Lucas has committed to spending $700 million of his own money to design and construct his monument to Star Wars and his other films. What’s lost to all non-Star Wars fans in this local drama is how many high-concept designs have come out of the films. Even the big Corellian ships that I prefer were designed over years of conceptual refinement in Industrial Light and Magic’s San Francisco studios. With the exception of light speed most of the concepts behind them are sound designs steeped in architectural and aerospace design tradition.

Gang and Yansong have a wealth of material to build their designs from. Even if they don’t want to go with the wavy forms that have made names for their firms, Gang and Yansong could choose an homage to the industrial simplicity of the Death Star or the ornate brutalist statement that is the Imperial Senate Building on Coruscant. Lucas, himself, has always favored traditional designs with ILM’s Presidio studio and his other buildings. The construction of Industrial Light and Magic’s current studio at the Presidio was one of the very first projects to take advantage of 3D design and building information modeling so, in a way, Lucas has changed construction technology as much as he has movie making technology. Many of the CAD tools we use today came out of ILM’s digital movie design work. Lucas said this museum will not be the traditionalist homage that ILM’s home is.

In a statement, he said: “We are bringing together some of the top architects in the world to ensure that our museum experience begins long before a visitor ever enters the building.”

We know you better than that, George. You’re still a scruffy nerfherder at heart and the furthest thing from Naboo royalty. Perhaps to rein in his star architects, Lucas also hired Chicago firm VOA Associates to be the museum’s executive architect. While Ma and Gang focus on the overall design, VOA will be responsible for 3D models and actual construction drawings for the prospective museum. Lucas hasn’t even come close to hiring a general contractor who will be responsible for details such as shielding the new museum’s exhaust port should preservationist rebels launch an attack. If the exhaust port leads directly to the main reactor, of course. The contractor will be hired after conceptual drawings are released later this year.

In 2012, I was lucky enough to take a tour of ILM’s studios and saw many of the film props and artifacts that could end up in the museum, including Lucas’

collection of classic movie posters. If the new museum is anything like ILM then this will be an addition worthy of the museum campus and a treat for both Padawan learners and grizzled Jedi Masters alike. May the Force be with Studio: Gang, MAD Architects and VOA in their task ahead, which will be more difficult than making the Kessel Run in less than 12 parsecs.