HSBC’s Made For Trade tour stops in Chicago. Panelists from Boeing, Hydro Inc and Skidmore Owings and Merrill discussed the skills gap, reshoring and public/private partnership in the region. Oh, and Mayor Rahm Emanuel showed up.

Ensconced in the cool confines of Trump International Hotel and Tower’s 16th floor conference room, Finn Roberts, MetalMiner’s brand-new intern, and yours truly wondered how many times the word “Chicago” would be uttered in an hour and a half.

(Ok, maybe I just wondered that, as Finn dutifully awaited any discussion about 3D printing changing the local manufacturing landscape. Spoiler alert: there was none.)

The short answer to my wondering? Way too many times – but as far as the advancement of manufacturing in the US Midwest goes, it’s a good thing that the word “Chicago” is synonymous with it.

Why would the word “Chicago” be spoken so many times? Because HSBC (the largest trade financer in the world) gathered a roomful of business, industry, government and academic leaders for a discussion on how the city is still rightfully steeped in manufacturing tradition, and can lead the charge into the sector’s future within global trade. Part of a countrywide series, HSBC’s panel discussion touched on some key areas of MetalMiner coverage, including reshoring, the skills gap, and the role of government in export and tax initiatives.

On Reshoring and the Skills Gap

Reshoring got a nod with a simple poll question addressed to the audience, Is It Happening? The results were, from what we’ve been hearing over the past 12 months or so, not surprising:

The slightly more lively debate centered around the skills gap – especially as it relates to public/private partnerships.

Richard C. Longworth, senior fellow at the Chicago Council on Global Affairs, said he has been hearing about the skills gap for five years, but it still hasn’t been addressed. As he sees it, it’s a failure on employers’ parts. When it comes to a shortage of skills, we’ve been looking to community colleges and technical schools to help, but employers have stayed out, he said.

Phil Levy, Longworth’s colleague over at the Council, and a Senior Fellow on the Global Economy, disagreed, saying that “there’s a fundamental problem to ask employers to do training.” It’s more costly for the company, and forces them to take on too much of an investment. 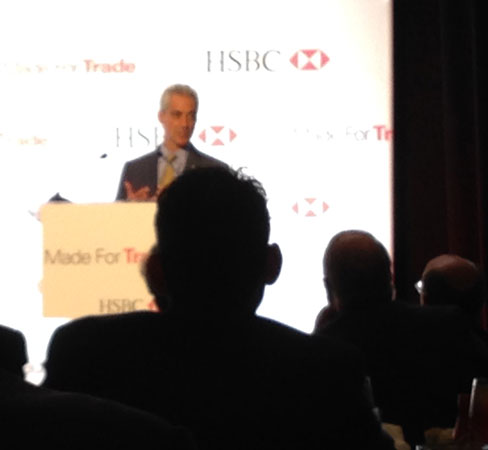 Rahm to the Rescue

Mayor Rahm Emanuel’s keynote incorporated both sides of that issue.

Between the trappings of any classic mayoral speech (banging the podium with the blade side of his hand for effect and including “the City of Chicago” in nearly every other sentence), Emanuel made clear that vocational focus in high schools and colleges in the city is a top priority, while “today, companies want to make sure they had something to do with the fundamental training” of their own employees, so they’re more invested in tapping into the students’ education earlier.

But WDBS? (What Does Boeing Say?)

Boeing Co., the largest US exporter according to panelist David Dohnalek, a senior vice president & treasurer with the company, wants what any large OEM or producer would want – a level playing field globally and more amenable corporate tax environment.

On the issue of exports, Dohnalek noted that a vast majority of our trading partners have export agencies that help their companies out. The US has the Export-Import Bank, but a minority of politicians are in favor of eliminating that bank, which would pose a big challenge to US exports – tantamount to unilateral disarmament, in Dohnalek’s words. He cited a National Association of Manufacturers (NAM) study out this week that said something like $500 billion of export credit assistance is given to global companies, but the US provides only 5% of that to its own companies.

Rahm, for his part, has been looking to double Chicago’s exports in five years, and that initiative seems to be moving along. But “we need to have a strategy to double exports, not just an accident,” he said.

PREVIOUS POST:
BHP Billiton, Rio Tinto, Vale Are Proving Iron Ore Is ‘Quickly Becoming a Big Boys’ Game’
NEXT POST:
LME Down But Not Out as it Awaits London Court of Appeals Ruling