After a falling aluminum price trend for the last three years, industrial buyers have grown accustomed to a low price environment and are wondering if the recent price strength since late spring is the start of a longer term upward trend or just a bounce back to a more stable level from unsustainable lows of sub-$1,700/ton.

The last two weeks of prices bouncing around either side of $2,000 per ton suggest we may have reached a new normal, and probably for the rest of this year. That may prove to be the case, but a number of recent articles exploring the demand side of the aluminum market paint a bullish picture of demand that will require prices to move up to the $2,500/ton level if it is going to be satisfied from a supply point of view.

The first is from the FT and reviews the quiet but steady migration from the use of copper to aluminum for the transmission of electrical power. In Europe and the US, we are familiar with the widespread use of All Aluminum Cables (AAC) for the long distance transmission of high voltage electrical power, but in other parts of the world — often parts of the world undergoing the most rapid development of transmission systems such as Asia  — copper is still the majority. In Western countries, the article quotes a producer as saying, roughly 60% of overhead and insulated power cables are made of aluminum but in the Gulf region and China it is only about 25%.

Yet China is spending billions on power transmission, and as the price of copper has more than quadrupled from $1,483/ton to $7,125/ton on the LME over the last 12 years, aluminum is barely any higher. As a result, the overall cost of an aluminum cable is now 40% less than that of a copper cable of comparable capacity, a factor that is increasingly driving change in material selection and boosting aluminum demand not just in power transmission, but also in railways, aeronautics, wind farms and even cabling for low voltage applications such as automotive.

Speaking of which, the sell-out demand driver for the aluminum market is, according to recent research by Ducker Worldwide, automotive. The sector has gradually introduced the use of aluminum in engine blocks, drive trains and closing panels like hoods and trunks, but according the Ducker’s Drive Aluminum Report the sector is in the grips of a revolution that will drive demand particularly for flat rolled products. In just three years from 2012 to 2015 total North American light vehicle aluminum consumption will increase by 28%, unprecedented in any other sector. 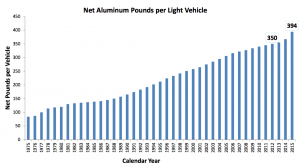 By the end of next year, total aluminum content for the 17.46 million vehicles expected to be in production will equal nearly 7 billion pounds. Body and closure parts will be 11% of the total, with pick-up trucks driving the trend. Each pick-up will, on average, contain almost 550 lbs. of aluminum, led by Ford’s F-150 at over 1,000 lbs per vehicle. 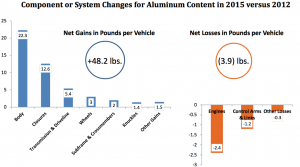 Where the US innovates, others will follow. The report predicts that globally over the next decade light-vehicle aluminum content will approach 35 billion pounds, making light vehicles the single most important application for aluminum. Seventy percent of this aluminum sheet will be in 6000-series alloys and is already driving an industry-wide investment in heat treatment and upgraded rolling capability.

Far from complete, from an investment point of view, this process is ongoing and will drive investment in the aluminum market for the rest of this decade. It will also, from time to time, create distortions in the supply market as aerospace demand has done in the plate market. When aircraft builders are busy mills divert capacity from the commercial market to the better-margin aerospace business. Much of the same is happening in the heat-treatable sheets market as producers struggle to meet rising demand and the non-automotive market finds supply squeezed and prices elevated as a result.

Prices will need to rise to the mid-$2,000s in order to encourage an estimated 1 million tons of non-Chinese production capacity that has been idled over recent years to come back online. At the moment, the market is only in a slight deficit with a mountain of metal held in inventory behind financing deals.

The reason LME prices have not responded more to the supply squeeze is because of an expectation that this inventory will supply the market if prices rise sufficiently to encourage it to be released, but so far that has not happened…and unless interest rates rise or the forward price curve collapses, it probably will not.