As countless articles will attest, nickel has been the standout performer this year on the LME, reaching a two-year high in May of almost $22,000 per ton, but the price has since fallen back to the mid $18,000s at the end of last month and many may be thinking that’s it.

The price has had its day.

It’s easy to see why, while scares over Indonesia’s export ban sparked worries of a supply squeeze and the expectation that China would need to switch to imports of prime metal to meet its needs.

As the FT points out, Indonesian ore is almost uniquely the raw material for up to 30% of global production of nickel, most of it in the form of Chinese nickel pig iron (NPI), a cheap alternative to pure nickel. Yet, early expectations of a supply squeeze did not materialize as it became clear Chinese consumers had stocked up ahead of the ban going into effect and as the market moved into the weaker summer period, high prices deterred consumers from taking on anymore scrap or prime metal in the face of them.

LME inventories have also been shouting “oversupply” from the rooftops as this graph from Kitco shows. If LME inventories continue to rise like this, so the theory goes, there is clearly not a shortage of metal and hence little justification for the high prices. 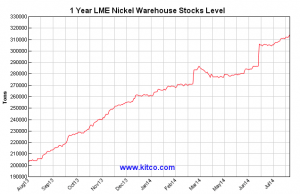 Nickel stocks in LME-registered warehouses hit a record of nearly 318,000 tons last week, up from 262,000 tons at the start of the year and 12% since just the middle of June, but curiously much of this recent increase has been in Asia where about half of the current inventory is in the LME’s warehouse in Jahor, Malaysia.

Strong inflows have also been recorded into warehouses in South Korea and the growing belief is the suspected commodity financing fraud in Qingdao port has resulted in a flow of metal out of Chinese bonded warehouses into regional LME locations. Reuters reports the liquidation of nickel financing deals showed up in Chinese trade data in June, where refined nickel and alloy exports spiked by 170% year-on-year to 18,065 metric tons.

The article quotes Macquarie Bank estimates that put Chinese stock levels at 50,000 tons of nickel in June, but this is almost certainly less than the month before and July will be lower still, as metal continues to leave. With so much heading into just one location, Standard Bank speculates its future availability may become restricted as has happened with aluminum in Detroit and Vlissingen, Netherlands, where the majority of the exchange aluminum stocks are concentrated and, hence, not immediately available to the market.

A further indicator that the supply market story may not be over is the price of nickel scrap. The FT quotes Citibank saying that scrap nickel in Europe now fetches 83-86% of the LME price, up from 75% at the start of the year. In Asia, scrap discounts are reckoned to be even narrower at 90% of the LME price, suggesting the market is tighter than inventory levels suggest.

Refined LME-grade nickel makes up only about a third of the total nickel market, the rest being made up of NPI and scrap, and it could just be the last to react to a gradually tightening supply situation. Prices are unlikely to move up significantly anytime soon, probably not for much of this year, but if lackluster Chinese demand picks up in the fall and the hoped-for relaxation of ore shipments from Indonesia does not materialize, prices could begin to react early next year.