The soon to be launched Elio may be a natty new automotive design, but some will love it and some will loathe it, as is usually the case with styles that are outside of the norm, personally, I rather like it. The three-wheel design has echoes of the vintage cars from the last century, although the Elio is bang up to date on materials and technology, the concept is as old as the very first vehicles.

Karl Benz played around with the three-wheel design, although today they are usually adopted for reasons of economy or to avoid tighter safety regulations on four wheeled cars. That’s not to say three wheels are inherently less safe than four, although stability in many designs is not as good, rather that three wheels legally are treated as motorcycles rather than cars.

In the case of the Elio, as the picture shows, there are two front steering wheels and one rear powered wheel like the Morgan Aero that set world speed records in the 1930’s. That brings in one of the firm’s reasons for going three-wheel rather than four, lower cross-sectional frontal area equals lower wind resistance or drag. The result? better fuel consumption. 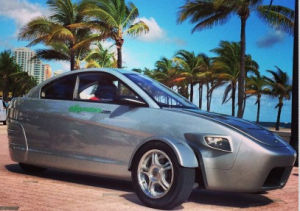 We would like to report that the Elio is produced from aluminum or even titanium, but in reality only the steel frame or roll cage is made from high-strength steel. The low weight and exceptional 84mpg fuel consumption are achieved by the use of sheet-molded compound (SMC) body parts, much like the Corvette Stingray. Elio tells us. The carbon fiber-reinforced polymer components exhibit about a fifth of the density of steel, but have the same strength and stiffness. SMC, as a concept, is not suitable for mass production as the time taken to make a panel is considerably longer and more labor-intensive than pressing a steel one, but for lower production runs or high-end vehicles where cost is not an issue, the concept is ideal. Many will buy an Elio for the economy, of course, a two-seater that protects you from the rain, returns 84 mpg and costs less than $7,000 in its basic form is almost guaranteed to develop a following.

Yet the Elio is much more than a bid for economy. According to Forbes, the launch vehicles will feature three airbags, power windows and door locks, an audio system with an iPhone/iPod interface, air conditioning and a 3-year/36,000-mile warranty. Indeed, so compelling has the offering been that over 26,000 buyers have paid money to reserve one for when production starts early next year. Personally, I am waiting for the turbo-charged version, Morgan Aero eat your heart out.