In its most recent quarterly Global Metals & Mining review, HSBC evaluates the position for steel products and draws some reassuring conclusions for consumers in terms of pricing over the next 18 months.

In terms of supply, the bank sees global global crude steel production through May running at 2.4% growth year-on-year supporting the bank’s earlier growth forecast of 2.7% for 2014. Global overcapacity has kept utilization below 80% resulting in limited power to influence prices and pressure on margins. After years of either outright recession then near-zero growth among most of the European economies, producers there approached this summer cautiously and inventory levels are said to be reasonable, not lean but certainly lower than in previous years.

North American remains well supplied, imports are up some 50% year-on-year and domestic production growth rates are positive after recovering from disruptions earlier in the year. 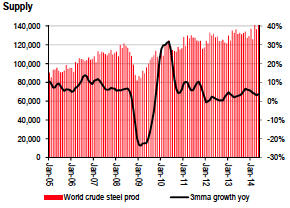 If the planned expansion plans in India’s steel sector come to fruition over the next three years HSBC predicts the country could become a net exporter sometime in 2015 whilst China will continue to release excess production onto the world market as production runs ahead of consumption even as efforts to cut older polluting plant limits overall capacity expansion.

Even with growth in steel consumption half what it was from 2010-13 new capacity is still being added. However, with inventory levels in China apparently back under control and the mini stimulus working its way through the economy demand is likely to remain supported and prices relatively stable for this year and early next. Meanwhile the wave of optimism in India following the election of the pro-business BJP party this spring has yet to translate itself into a noticeable rise in demand among India’s consumers, so the demand side is badly in need of pro-growth policies being implemented by the new administration as new production capacity comes on-stream. 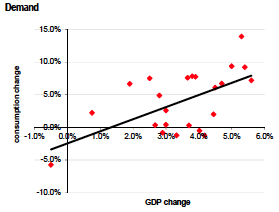 Demand currently outside of Asia is lower due to the seasonal downturn of the summer months in the northern hemisphere but both Europe and North America are expected to pick up modestly going into the fall to maintain if not build inventory levels. The fall in iron ore prices has taken some cost pressure off producers for the time being and with global GDP growth predicted by HSBC at 2.4% as global steel consumption growth of about 2% is expected, down a few basis points from where they were predicting 2014 would end earlier in the year. 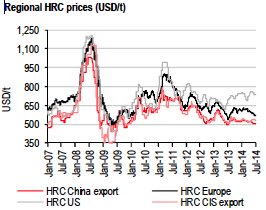 The fall in iron ore costs mentioned above has been accompanied by falls in coking coal prices and contributed to slightly improved margins for producers the bank says, a situation they expect to soften towards year end as consumers demand finished steel prices reflect a medium-term lower raw material cost environment. Although the market remains oversupplied and producers seem reluctant to cut back on production, prices are not expected to significantly drop from current levels with only slight weakness from current levels in H2 this year in North America and China and marginal increases in Europe through early next year. Generally, North America remains better supported than Europe, achieving a price premium and with better growth prospects but vulnerable to imports capping rises next year.