Home | Global Trade | Zinc: A Deficit or a Surplus? And When?
Commentary

Zinc: A Deficit or a Surplus? And When?

The long-term narrative for Zinc is closing old mine capacity, limited new mine additions and demand growth resulting in a market deficit – at some point.

The debate is when. The World Bureau of Metal Statistics puts the market narrowly still in surplus to the tune of just 38 kilotons from January to April, but that’s fairly consistent with their estimation for last year as a whole of 114 kilotons. The International Lead and Zinc Study Group (ILZSG), meanwhile, is reported by Reuters to estimate the world outside China to have a 138-kiloton surplus for the first five months of this year, down from 244 kilotons for the same period last year.

With China, alone, consuming nearly half the world’s total a surplus or deficit there is crucial to assessing the global market position. Unlike aluminum, which exists in a parallel universe separate from the rest of the world, China’s zinc market is very much a part of the global zinc market with imports and potentially exports playing a role in overall surplus or deficit. The ILZSG estimates China’s zinc market to be in a 332 kiloton deficit from January to May, but Andy Home at Reuters cautions about taking these headline figures at face value, the ILZSG assesses consumption by including imports, a significant proportion of which is almost certainly not consumed at all but flows into bonded warehouses as part of the shadow banking sector’s collateral credit financing market.

Quoting Goldman Sachs estimates, Reuters suggests China has over imported around 200 kilotons this year, all of which has gone into bonded storage where stocks have risen by that amount this year alone. Whether this will continue, given the current legal and regulatory scrutiny of this form of credit financing in China, remains to be seen. The point is, these imports should not be taken as consumption, and China’s true consumption may be somewhat less than headline figures suggest. Both Reuters and Goldman Sachs suggest the market may not go into deficit until next year at the earliest and suggest the current price strength, fueled by investor enthusiasm for the deficit story, may be overdone for now. 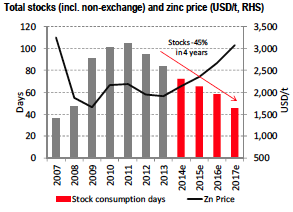 HSBC is taking a more bullish stance in their Quarterly Review, certainly in terms of the deficit story, saying they expect the market to be in deficit this year to the tune of 293 kilotons, but then they are taking the falls in LME and SHFE inventory as clear markers for material shortage.

Reuters, on the other hand, looks at exchange stock outflows a little differently, saying – as far as the LME is concerned – we can’t take stock flows as indicative of anything since it is such a narrow market. 84% Of LME zinc inventory is held in New Orleans and, of that, the vast majority is held by just one major position trader, Glencore’s Pacorini. In March 147 kilotons was loaded in, since then 120 kilotons has been loaded out, yet in July 62 kilotons had been loaded back in again. In reality, the chance any of this went to consumers or came from producers is slim. It’s probably been shuffled between on warrant and off warrant storage. As such, LME inventory flows should be taken with a pinch of salt when determining if they mean anything for overall supply or demand. 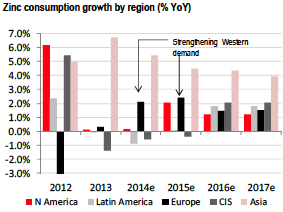 Zinc demand has certainly been solid if not robust. HSBC see growth from just about all geographic sectors with the exception of the CIS which has been busy committing economic suicide recently over its activities in Ukraine. But the bank is expecting economic activity there to recover from 2016 and global demand growth to be solid while supply experiences the loss of major aging mines. As a result, the bank predicts double-digit percentage price inflation through 2017. Specifically, they say the annual average price is expected to be $2,350 (USD) per ton next year, $2,665 per ton in 2016 and $3,070 per ton in 2017. Investors, on the whole, seem to share their enthusiasm, they may just have piled in a little early for the ride.