Falling headline exchange stocks and the prospect of mine closures looming in the next two years have lent support to Zinc prices not just from consumers and traders keen to protect their positions, but most notably from investors, money managers or hedge funds – depending on how you want to label the diverse array of speculative players in the metal markets.

A recent FT article quotes details from the LME’s Commitment of Traders Report, published for the first time on Tuesday, which shows money managers held a long position of nearly 135,900 futures contracts in zinc as of August 1 – nearly 30% of open interest, or total number of outstanding contracts. By comparison, the equivalent open interest figures for copper and aluminum were 24% and 25%, respectively, the paper said, and nickel, the best performing metal on the LME this year, was only 23.5%.

After rising 17% this year so far some analysts are suggesting the price, like that of aluminum, may have gone too far too fast and will be subject to a period of consolidation now. The current price of $2,374/ton (both cash and three month) is already at the level HSBC suggested in a recent report the metal may achieve next year.

HSBC was being relatively bullish compared to consensus, which they put at $2,212/ton for 2015. Much of the speculative money flowing into zinc could as rapidly flow out again. Demand is rising everywhere, not just in Asia where the majority of zinc is consumed, but in the currently depressed construction sector and hence it’s rising at a sub GDP rate of 5.6% in China, but also in Europe and North America where growth at 2% is greater than GDP. 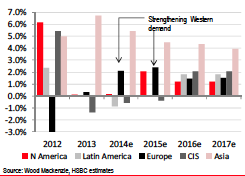 This graph courtesy of HSBC predicts an overwhelmingly positive demand picture for a metal which is going to face supply constraints in coming years. Supply constraints that HSBC suggest have partly been met by falling exchange inventory.

Inventory has fallen from 100 days of supply in 2011 to 60 days of supply now and is anticipated to reach 46 days by 2017 on current trends. Of course, some of this metal is tied up in longer-term stock financing deals and may be no more available to the market for prompt delivery than if it was stored on the moon.

The fact the LME shows nearly 700,000 tons of stock doesn’t mean it’s all available, likewise the SHFE inventory has been steadily falling over the last year. In some cases this movement from exchange inventory will have been migration to non-exchange storage, but with the LME forward price in backwardation that’s not currently a viable option. The signs remain positive for further rises next year, even if, as some believe, the current price could be our peak for the rest of this year.

Get a zinc price forecast today.