What is happening to the copper market? A month ago analysts were calling it a bear market and predicting prices would fall on oversupply and falling demand. Goldman Sachs was quoted as maintaining it’s 3- and 6-month views that copper will sink to $6,600, while Macquarie was even more bearish targeting $6,500 by the end of this year. 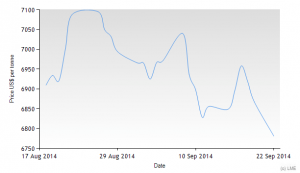 Since then prices have fluctuated in a range and only fallen below mid-August prices in the last few days. One of the support factors is LME stocks, which are at the lowest level since 2009 with current headline inventory of 153,700 tons close to 6-year lows, while available tonnage, excluding metal that has been canceled prior to physical drawdown, is lower still at 116,600 tons.

Lower, even, than in August when the previous warnings were issued. It has been stuck around that number for some months now with arrivals into the LME system still conspicuous by their absence. Maybe that explains whey the copper price recovered from a nosedive in March to finish down only slightly during the period. 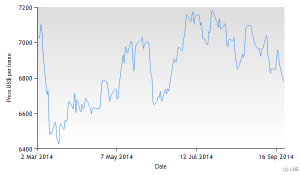 In spite of a Reuters’ analyst poll this week indicating that copper will have a global oversupply of about 285 kilotons during 2015. It has been all eyes on Chinese demand to determine whether oversupply becomes a reality, so when industrial output indicators unexpectedly picked up this month it created an uptick in prices.

The gain in the flash PMI was at odds with data such as credit growth and industrial output according to Reuters, which has pointed to a loss of momentum and the possibility that the official 7.5% economic growth target wouldn’t be met in 2014. Encouragingly for metals producers looking for price support, total new orders gained and new export orders rose to the highest since March 2010, indicating that the rebound in the PMI may be maintained for the next few months. In addition, a fall in employment may, more than any other measure, prompt Beijing to introduce further mild stimulus to the economy, which it is hoped by producers would support prices.

Future price direction, therefore, is a balance between the potential level of oversupply – which has yet to manifest itself in rising inventories or falling delivery premiums – and ongoing demand in large part from China but to a lesser extent from a gradually strengthening North American market. Our call is probably for lower copper prices. Price falls haven’t stimulated the usual buying from Chinese consumers suggesting they are either adequately stocked or pessimistic about future demand in spite of better PMI figures. It may also suggest a proportion of historical buying was for the shadow banking market as collateral, a model that is under considerable pressure following scandals over metal ownership and pressure from Beijing to close it down. In the medium term, Goldman Sachs may have it right and $6,500-6,600 could be a probable level by early next year.