Aluminum’s Price Potential Capped By Its Own Idled Production

The Aluminum price made something of a recovery this year surging from the Spring to over $2,000 on the London Metal Exchange before weakening a little this month. 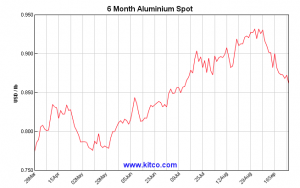 On top of that, physical delivery premiums have continued to rise with the Midwest ingot premium currently running at $465 to $485 per ton as we reported back on September 21. The delivery premium is a reflection of the tightening market, some are saying proof the market outside China is already in deficit.

The rise in the LME was more speculator-driven and the subsequent fall back a result of profit taking. The combined result is smelters are enjoying delivered spot prices in the region of $2,400 per ton today, a level at which a recent Reuters article states shuttered capacity is being brought back on stream, if not in the west, yet, then already in China. Indeed, UC Rusal is reported in the article as saying a level of $2,500-2,700 per ton would see some 40% of idled capacity back on stream and the article comments Rusal, enjoying as it does a weaker ruble to the dollar and low hydroelectric power costs, is on the brink of bringing back some of its own idled capacity.

Demand continues to grow, but it is the true state of supply that will determine how tight the market becomes, if the market swings to a deficit, speculators will come back to bid up the LME, but at present the consensus is the market isn’t quite there. The median forecast of analysts polled by Reuters in July was for a surplus of 235,500 tons this year, moving to a deficit of 4,444 tons in 2015. It would take little to keep the market in surplus or push it to a more pronounced deficit as 4,444 tons is a market in balance. Clearly, if smelters are encouraged to restart some of that capacity, the point at which the market moves into deficit will be pushed back. The price is, therefore, capped, for the time being at least.

In China different variables are in play, encouraged by the promise of state subsidies, some 1.3 million tons of annual capacity has gone back on stream in China, according to Richard Lu at consultancy AZ China in Beijing quoted by the article, who said this could rise to 1.6 million tons being restarted by the end of the year.

While Commerzbank is quoted as saying Chinese primary aluminum output rose 8.8% year-on- year to 2.027 million tons in August, the first time it has broken above the 2 million mark. The Chinese market though, has and looks likely to remain a market apart and leakage from overproduction in China. A deficit in the western market is likely to remain confined to semi-finished products such as extrusions and flat-rolled products which are supported by rebates rather than primary metal which is held back by export duties.

The good news is for western primary producers the current spot market price allows a return to profit, the bad news is with the market close to balance and so much idled capacity sitting around looking to restart, the upside is limited. Not that consumers will complain.

PREVIOUS POST:
Stainless MMI®: The Week the Nickel Ore Shortage Was Debunked
NEXT POST:
Coal In India: Where Do We Go From Here?