On the face of it India’s decision to scrap all but 4 of 218 coal blocks allocated by the government over the last 20 years and re-auction them next March seems like madness. The country is already the world’s number 3 importer of thermal coal for power generation yet it sits on massive reserves, enough to put it 5th in the global league table or coal resource assets.

By any count, domestic supply is already falling woefully short of requirements. So acute is the shortage of coal that half the country’s power stations are said to have no more than 1 week’s supply on hand, the lowest reserve position since mid 2012 when 620 million people in India were cut off in one of the world’s worst blackouts ever. 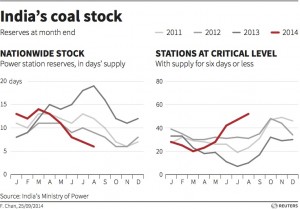 Coal fuels more than two-thirds of India’s electrical power generation in a country that is already renowned for periodic power failures and where a third of the country’s population are without electricity. Power could be said to be the single biggest issue shackling the economy and welfare of 1.2 billion people – we’d add bureaucracy vies with power but that’s another topic.

But another major challenge that held India back and which the country has made heroic strides toward overcoming is corruption, a process that was started by the previous administration but which has been redoubled under Narendra Modi’s new administration. It was ruled by the courts and supported by the government that the previous practice of “selective allocation” was illegal and arbitrary.

The issue has been contentious for some time and uncertainty about long-term ownership of the coal blocks has held back investment, of the 218 in question only 40 are operating at anything like capacity. India’s Supreme Court, is said to have let off two coal blocks operated by Reliance Power and one each by state firms NTPC Ltd and Steel Authority of India Ltd, as some of them are developing mega power projects critical for the country. The others are allowed to continue to be worked by the “owners” but must be handed back by March of next year when they will be auctioned off in a transparent tendering process.

Following the court ruling, shares of other block holders such as Jindal Steel & Power Ltd., Hindalco Industries Ltd. and Tata Power Co Ltd. fell when it became clear they will not only lose their mines but may also be fined. An audit in 2012 showed that allocating the resources, instead of auctioning them off, had cost the exchequer as much as $33 billion, leading to investigations into the practice and allegations of crony capitalism.

The title rights cancellation will also hit several banks. State Bank of India and Power Finance Corp Ltd. are said to be among financial institutions that have together lent $10 billion-$12 billion to the coal, power and steel sectors. Depending on how debts are underwritten and on which entities will determine the extent to which the banks come out of this undamaged, you can bet India’s often complex corporate structures will be exploited by firms losing their assets to walk away from the associated debts.

It is hoped the 6-month time frame should ensure that the impact on coal imports and the current account deficit will be minimized but there is still a huge amount of uncertainty around how coal supplies will hold up and whether the power industry will be able to keep the lights on with such limited stocks. The only silver lining in the short term is coal prices are still falling on the world market, somewhat mitigating the impact on the balance of payments due to imports. What value the state will realize from the auctioning of these 214 blocks next year will likewise be depressed by the current low global coal price but that is probably of scant concern to the government, whatever they get, and it will be in the billions, will be welcome and the investment in the sector that will be released by having clear ownership rights should in the longer term be immense.

PREVIOUS POST:
Coal In India: Where Do We Go From Here?
NEXT POST:
Nickel Officially in a Bear Market