‘Taper Tantrums’ Could Sink Emerging Markets as the Dollar Strengthens

Five years of unprecedentedly low interest rates from the Federal Reserve have fueled a binge of borrowing, adequate repayment of which has been helped by healthy inflows of capital seeking higher returns from emerging markets, the so-called carry trade.

But appetite for local currency debt has also slowed, with just $22 billion in bonds launched in August, compared with a monthly average of $6 2billion over the past year, according to estimates by the Institute of International Finance (IIF) reported by the Financial Times. Such figures expose the vulnerability of several emerging market economies that rely on carry trade inflows not only to keep domestic interest rates low, but also to finance current account deficits, fund infrastructure projects and keep corporations flush with cash.

A sudden end or sharp winding down of such a trade could have a profound impact on those economies. Although the magnitude of the EM carry trade is unknown, the article says estimates suggest that about $2 trillion in overseas capital is invested in local EM debt, more than would be at risk from a sovereign default for example. It is true to say we are not seeing a disorderly unwinding of this trade yet, but it is a risk for those economies that have not taken steps like Peru and Colombia, to shore up their reserves, countries another FT article highlights that include Brazil, Turkey and South Africa. 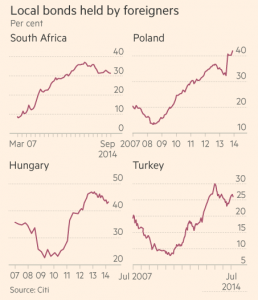 These countries not only face too much overseas borrowing, the prospect of rising interest rates, and sliding currencies but also high domestic inflation that will limit room for loosening domestic policies to counter rising global interest rates.

There have been 2 previous “taper tantrums” in which certain emerging markets currencies and borrowing costs have reacted badly to earlier indications from the Fed that they intend to tighten. The markets are more sanguine about the inevitability of Fed tightening now having had 6-12 months to come to terms with the prospect, but the reality is rates haven’t risen and yet exchange rates and investment in foreign debt have sharply changed track. We are in the early stages of the market’s reaction to the triple whammy of a stronger dollar, high borrowing costs due to both the dollar strength and rises in Fed rates, and a sharp drop in inflows fueled by the carry trade. Companies with supply contracts or investments in the more vulnerable emerging markets are no doubt already making contingency plans. If they aren’t, they should be.