Fracking, in all its variations and personifications, has had a revolutionary impact on the global energy market. For the US it has meant fundamentally lower feedstock for petrochemicals and lower energy prices for a host of industries such as steel and cement, in addition to prompting a switch in electricity generation towards natural gas.

But the very success of America’s hydraulic fracturing industry has rippled across the world in a not always positive way. In Australia, the very success of America’s natural gas industry is making investors wary of investing in its own. The country is set to become the world’s biggest exporter of LNG with 84 million tons of capacity coming into production in 2018. According to an FT article, energy companies have invested $200 billion in Australian projects over the past decade, including three LNG plants in Gladstone operated by consortiums led by the UK’s BG Group and Australia’s Santos, and Origin Energy.

gas from coal is nothing new but these plants are the first in the world to convert coal seam gas to LNG, almost exclusively for shipment to the (relatively) nearby Asian market. The scale of the projects is vast, Gladstone is said to be the biggest building site in Australia with more than 13,000 employees toiling away over 5 years. The 3 LNG facilities have each consumed 2 and half times as much concrete as the Empire State building and 5 times as much steel as the Eiffel Tower, in addition to aluminum used for the low temperature end of liquid storage and handling operations.

The problem for Gladstone and others like Gorgon in Western Australia is the cost. To get a payback, the price of natural gas has to remain at a sufficiently high level to earn returns, as cost blowouts have driven up the construction cost of these plants, that return has looked increasingly at risk just as US natural gas is slowly seeping onto the global market in the form of LNG shipments. Deutsche Bank is quoted as saying current contract prices to ship LNG from Australian to Japan are about $14-$15 per million British thermal units whereas the equivalent price of US LNG is just $11.84, yet the return needed on Australian plants has risen as prospects for the price of gas sales have fallen.

The Gorgon project is now forecast to cost $54 billion, compared with initial estimates of $37 billion in 2009. Santos’ plant in Gladstone was initially set to cost $16 billion and will now come in at $18.5 billion. McKinsey & Co. has estimated it costs 20-30% more to build projects in Australia than in the US or Africa, due to a strong local dollar, high labor costs and the nature of its gas reserves. Coal seam gas is found deep underground trapped in coal beds that require fracking, extraction and separation from fracking liquids before transportation from the interior to the coast where the gas is cleaned, cooled and liquefied for export. The infrastructure costs are huge.

The cracks are showing, so far Chevron’s Gorgon has sold just 65% of available gas in 20-25 year long-term contracts, compared with a target of 85% the FT reports, in spite of rising demand. 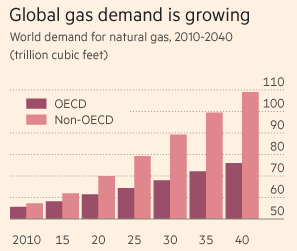 Nor does Australia only have the US to compete with, although the country is set to overtake Qatar as the worlds largest LNG exporter, it is facing increasing competition from other sources of both fracked and conventionally produced natural gas, not to mention the planned Russian sales to China and China’s own plans to rapidly expand fracking. 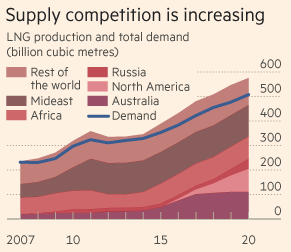 Those who have invested in existing operations are hoping the current worries will pass, that Russia’s sale to China will only ever be a fraction of demand, that a switch from coal for power generation will accelerate demands for natural gas and, maybe most of all, that US LNG does not prove, in the long run, to be as competitive as it currently appears. New investment, though, will likely have to wait for the dust to settle and the viability of the plants coming on stream to be proven before more money is found. Pity for Australia, just as iron ore waned it would have been perfect timing to herald a new commodity to lift the prospects for the lucky country.