Why The Glencore and Rio Tinto Marriage Could Work

The recent hullabaloo around Glencore’s proposed merger with Rio Tinto is probably to be expected for what would form the world’s largest mining company with a potential market cap of $185 billion and dominance in several key commodities, particularly iron ore and copper, but opinions are divided about the wisdom of such a marriage.

Some question why Glencore would want to get into a business with such a reliance on the iron ore market when by all accounts the price is set to fall further, almost certainly below its 5-year trough of $77.50/ton and has little prospect of seeing a substantial rise for some years to come. 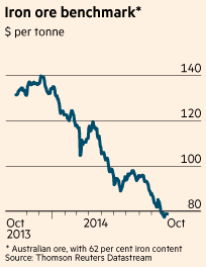 Others can see a counter argument.

Iron ore is the only major metal commodity that Glencore doesn’t have a significant position in, but they still question the timing when the prospects for iron ore are so gloomy. Mining companies operate on long timeframes, these are not electronics companies responding to the latest product launch, acquiring assets like Rio’s Australian iron ore reserves is a decision that has to be looked at in decades not months or even years.

The fact Rio’s board unanimously rejected the approach does not mean the idea is dead, Glencore is merely prevented from returning to the table for 6 months, time for both sides to come to terms with the idea and find solutions to potential hurdles. Investors on both sides could have much to gain in the long run.

As with any merger, the relative valuation of both is a key issue as we saw with Glencore’s takeover of Xstrata. But as we said at the time, and history has vindicated the combined entity, it is much more than the sum of its original parts. The Glencore-Xstrata merger was handled rapidly and professionally with capital-intensive greenfield projects sold off, economies of scale realized, rationalization of management operations and headcount implemented in a transparent and well-executed program that has moved the combined company’s assets down the cost curve and yielded sustainable results.

One of the strengths of the combined Glencore-Xstrata business, its diversified portfolio, is something that should appeal to Rio shareholders facing years of low iron ore prices and dividend pressure in spite of the firm’s attempts to slash costs and generate cash it has promised to return to shareholders. Rio is said to make 60-70% of its EBITDA from iron ore, with copper as the next biggest contributor at 10-15%, compared to diversified Glencore that makes 30% of it’s EBITDA from copper, about 20% from coal, 10-15% from zinc and 8-10% nickel, with a trading business that contributes around 20% of EBITDA according to Investec.

What’s In It for Glencore?

So, what’s the attraction for Glencore? Would the firm not be better off maximizing the return on the Xstrata merger first, and is iron ore a commodity anyone would want to get into right now? Well it is something of a truism that the best timing for investments is to get into them when everyone else is looking to get out, certainly in terms of price. Provided Glencore does not have to go hostile and pay a hefty premium, iron assets, over the next year or two, are unlikely to ever be as cheap again.

In the exact reverse of Rio’s disastrous acquisition of Alcan at the top of the commodities super-cycle, Glencore’s timing on merging with Rio could value Rio’s iron ore assets at a relative low. The only survivors in the iron ore industry will be those miners with the lowest-cost assets and Rio sits at the top of the competitiveness pile, so however much analysts may suggest there are plenty of iron ore assets, Glencore could look at if they really wanted to seriously get into the sector, there are none as viable as Rio’s.

Of course, a merger of 2 such behemoths would need to overcome not just shareholder approval but regulatory and antitrust clearance, a process that both firms are familiar with. Glencore divested its copper mine Las Bambas to MMG of China as a condition of Chinese regulatory approval for the merger with Xstrata but in the process is said to have pocketed $7 billion following a valuation when copper was somewhat higher than it is today. A merger could allow the combined entity to divest its majority stake in Rio’s Simandou iron ore project in Guinea, potentially to Rio’s major shareholder Chinalco, avoiding the estimated $20 billion capex required and also Rio’s Oyu Tolgoi copper mine, a prize but challenging asset that Glencore already has a leading market position in.

Stronger Together… When it Comes to Debt

In the process debt, which has been reduced at Glencore since the merger but still stands at a hefty $37 billion, would be reduced as a percentage of the combined entity, raising the firm’s credit rating and lowering borrowing costs as global interest rates begin to rise in the coming years. A merger, if it happens, clearly won’t be anytime soon, but the idea is now out there and, in spite of what some are saying, we feel has more to commend it than many other mergers we saw during the commodity super-cycle.