Home | Commodities | It’s a Great Time to Buy Gasoline, and It Might Get Even Better
Commentary

It’s a Great Time to Buy Gasoline, and It Might Get Even Better

Calls by the industry to relax the ban on oil exports enacted during the Arab oil embargo in the 1970s are being fiercely resisted by consumers and many of their congressmen.

The fear is that without access to higher global prices the domestic price of crude could drop so low that tight oil supply becomes uneconomic and investment not only  dries up but even active wells are idled – a boom to bust scenario the industry feels can only be avoided by producers being able to access higher global prices. 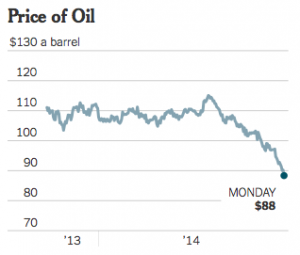 The slide in global, not just US, crude oil prices has been nothing short of dramatic this year as OPEC has actually ramped up production while demand has eased. According to the NY Times, prices of Brent and the American benchmark, West Texas intermediate crude, have slid by 20% or more since early summer, WTI dropped particularly hard over several days last week, suggesting, the article says, there is a glut in several parts of the country, particularly West Texas, where production has been ramping up in recent years.

This is great news for gasoline consumers, of course. Gas prices have dropped, albeit with a slight lag to the oil price. The NYT reports that this week the national average price for regular gasoline was $3.20, 9 cents lower than it was a week ago and 14 cents below the price a year ago, quoting AAA motor club data. Tom Kloza, chief oil analyst at GasBuddy.com, is quoted as saying, “Clearly there is a rift in OPEC, and that means we are more likely to see a price war over the next 6 months. Crude oil is teetering on the brink of collapse.”

Mr. Kloza went on to predict that the national average for regular gasoline was headed to between $2.95 and $3.10 a gallon.

Lower oil prices will be a boost for cooling global growth, even if oil producers see national incomes dwindling. Those most reliant on hydrocarbon exports for revenue will naturally be the hardest hit, typically many Middle Eastern states, Russia and Venezuela. But for consumers in the west, in Asia and many emerging markets such as China, lower oil prices will cut import costs and increase GDP.

So, what about those US shale oil producers and the prospect that the oil export embargo may be lifted? Opinions differ depending on who you speak to, but according to a Reuters report Maria van der Hoeven, executive director of the International Energy Agency said that only a tiny minority of shale oil production would be affected by the slump in prices to near 4-year lows.

We may see a partial relaxation of export restrictions for certain oil types and a continued increase in exports of refined products, but a wholesale relaxation of crude exports seems unlikely unless oil prices were to completely collapse. OPEC is due to meet in November to set first quarter 2105 quotas, at which point some stability in production and hence support for prices could be achieved. Saudi Arabia appears comfortable with prices around $80 per barrel but with budgets set when oil was over $100 they have limitations on how much below that level they would be willing to see the price fall, even if their cost of production was a quarter of that level.

Consumers can likely expect to see lower gas prices sustained throughout next year unless a major geopolitical event upsets the balance in Libya or Iraq, that seems to be the prevailing view.

How can you best follow raw material and metal price trends? Become a MetalMiner Member.

PREVIOUS POST:
India More Reliant on Foreign Coal
NEXT POST:
The Tin Market Falls Apart as Prices Plummet… If it Only Had a Heart