The UK Is Turning the Tide in Sustainable Electrical Power Generation

With the exception of geothermal energy most forms of renewable electricity generation have an intermittency to their delivery. Even hydro-electric power can fall short in periods of drought or low rain fall as the Chinese can attest to on the Three Gorges dam across the Yangtze River.

Hydro, though, is generally taken as the dream power source. Usually large, sustainable for long periods of time, non-polluting – apart from the millions of tons of cement used in the construction phase – and, once built, environmentally acceptable.

Wind in its various guises and solar have both received massive state funding, usually at the cost of consumer tariffs, and while the cost is coming down and the reliability is improving they are both inherently unreliable in terms of power delivery requiring back-up generation capacity which is expensive and fossil fuel-based. In addition, at least in the UK, there has been a massive public backlash to unsightly turbines dotting the countryside to the point where few onshore projects are now being approved.

Solar farms are also facing increasing opposition, termed a blight visually they are also criticized for taking up valuable farming land. There is one other form of power generation, however, which is as non-polluting, environmentally acceptable and potentially has even greater longevity than hydro and has potential to add leisure facilities if planned and coordinated properly – and that is tidal.

So having signed up in a moment of madness to ruinously expensive greenhouse gas emission targets, the British government is now welcoming a project that, if rolled out around the country, could generate some 8% of the UK’s power and last for 120 years.

Better still, the first stages of the project are being partially underwritten by private money in the form of the UK’s pension funds and insurance companies. Prudential is to be a cornerstone investor in an £850 million first stage Lagoon One tidal project in Swansea due to start construction next year and be operational by 2018 according to local reports. 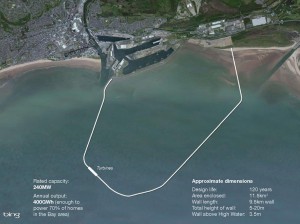 The first phase of the project comprises a 6-mile horseshoe in the Swansea Bay, part of the Severn Estuary in South Wales, and will produce 320 megawatts of electricity, but subsequent stages will add 1.5 gigawatts and a further 1.8 Gw by 2025 with combined power costs below that of wind or solar on current estimates.

The reliability, alone, has an additional value as back-up power when the tide turns can be planned decades in advance allowing for optimization and management rather than hour-by-hour reaction. The plan is eventually to create additional projects around the country where the geography is suitable, and as tides vary around the country, the power delivery will balance out to create something closer to a base-load effect.

As the Telegraph recently reported, the Severn estuary has the second-greatest tidal range in the world, after Canada’s Bay of Fundy. Atlantic sea water accelerates on meeting the continental shelf, pushing a huge volume into a relatively shallow pool.

Apparently, the UK has half the tidal-power resources of the whole of Europe and although the Severn estuary is the most promising, it is not alone with some estimates putting the total contribution up to a potential 25% of the UK’s domestic energy needs if the developing lagoon technology is fully exploited around the country.

In addition unlike wind power where much of the technology is made and imported from continental Europe or solar where the panels are increasingly imported from China, the aggregate for the lagoon walls would be mined locally and the turbines would be manufactured in the UK by firms like Alstom and Voith.

The technology does not excite on the same level when it comes to metals consumption, but if the hard-pressed UK consumer is going to have to subsidize anything to encourage new, less-polluting forms of power generation, we would sooner see the money go into such an aesthetically pleasing, long lasting and dependable resource as tapping the power of the tides.