Home | Commodities | The LME Week Dinner: The Most Opulent Metal Update in The Kingdom
Commentary

The LME Week Dinner: The Most Opulent Metal Update in The Kingdom

Contrary to the generally depressed view of most participants at last night’s annual London Metal Exchange Dinner, the LME itself and Hong Kong Exchanges and Clearing Ltd’s CEO Charles Li in particular, was in barnstorming mood. In a robust and thankfully concise dinner speech, Mr. Li listed out the progress the LME had made in the 2-and-a-half years since it’s been taken over by HKEx often in the face of doubts from without and within as to whether they would succeed. 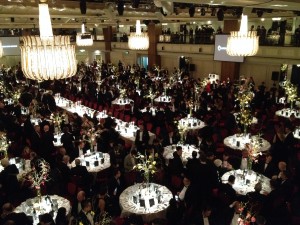 The most opulent food fight in all of London.

The LME is clearly proud of the successful launch of its clearing platform LME Clear, a project that is said to have cost more than £100 million and, in part, was responsible for a rise in headcount at the 137-year-old exchange from 80 to over 320 employees since 2012. The industry, after initial doubts in some areas, has embraced the new platform and worked with the LME to bring it to a successful conclusion, allowing the exchange to establish a robust clearing platform not just for the London market but to provide the infrastructure for their latest wheeze – commodity futures contracts for China.

Recognizing that the regulatory and time-zone hurdles required to offer LME hedging services to China in one direction and in changing legal restrictions on any but a few major corporations being allowed to hedge outside the country in the other, the LME had to come up with something different if it was to tap what is said to be the largest single commodities trading market in the world.

That “something different’ is not so much a halfway house as a blend of east and west using the LME’s experience and infrastructure blended with products designed for and a marketplace in China. Or to be more precise, in Hong Kong. HKEx plans to launch mini industrial metals contracts from Dec 1, similar to it’s mini contracts in London but aimed at Chinese retail clients and smaller industrial users.

The contracts have a lot size of 5 tons rather than the 25 tons on LME’s benchmark contracts. The contracts will be based on settlement prices of the LME futures and settled in cash, not with physical metal like LME contracts. Crucially, the contracts will be priced and settled in the Chinese currency. Crucial for the product’s success but also an opportunity for London’s banks to extend their renminbi trading on the back of the LME’s new offering. The launch metals are the LME’s most popular – Aluminum, Copper and Zinc, with Thermal Coal likely to be added sometime in the new year.

No discussion of the LME is complete today without reference to the warehouse debacle and Charles Li, among other speakers, gave some mention to the thorny issue in passing. Following the successful High Court appeal against Rusal’s blocking tactics the load-in, load-out (LILO) rules will be implemented this year and back-dated to July. The warehouse operators had been in compliance since the summer, anyway, so no sanctions will be imposed as a result. Further measures will follow but, as the LME doesn’t want to fall foul of further court action over consultation, it is not saying anymore until the process is complete.

The LME Week dinner is the largest gathering of the global industrial metals sector and said to be the largest black-tie event in Europe. So the setting was appropriate for the various speakers positions to be overwhelmingly positive and optimistic, it is clear the LME has had a tough 2-plus years. The HKEx ownership has been a baptism of fire, but they are emerging the stronger for it.

It would be rash to suggest the LME has another 137 years ahead of it, but HKEx has done more than most could have predicted to position the venerable institution for the decade ahead and keep it relevant to the industrial producers and consumers it is supposed to serve.