Most US industrial manufacturers are concerned about how the government – from the US Congress to the EPA to other regulatory agencies – isn’t doing enough to help their cause.

A recent Prime Advantage survey shows that legislative and regulatory pressures are the second-largest concern for the more than 700 US manufacturing the firm polled: 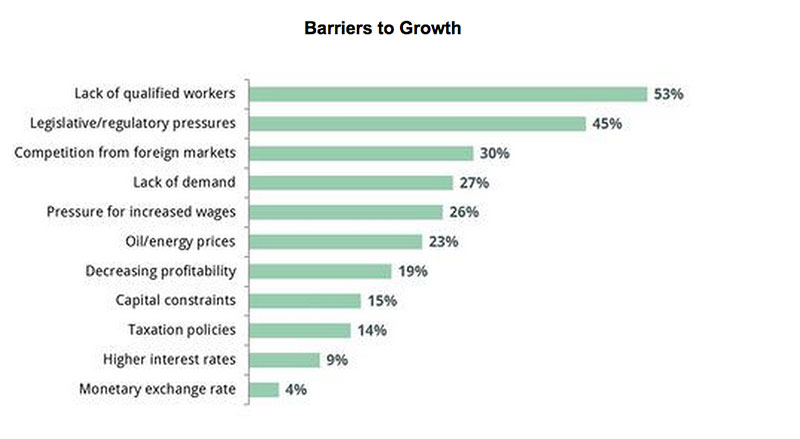 Of course, that’s second only to the lack of qualified workers, which is a huge issue on our radar – more on that here.

Back to the legislative vs. regulatory debate…

How Midterm Elections May Change That

Handily enough, US midterm elections are on the horizon. Based on the past few months of polling, many believe that Republicans have a great shot at taking back the Senate, but they’d have to win a net of 6 seats to do so.

Democrats have a 53-45 majority at this point. Most polling suggests the Republicans are favored to win between 5 and 8 seats. The last time the Republicans controlled both the House and Senate? The 109th Congress during President George W. Bush’s second term. (Democrats took control of both chambers after the fall 2006 elections, but Republicans took over the House in 2010.)

A big bone of contention has been overreaching EPA regulations tackling carbon emissions, which may have huge cost implications for manufacturers the way they’ve been proposed, including but not limited to lost jobs, higher energy costs and reduced competitiveness. If Republicans win, they’ll surely try to roll back several different environmental regs, including the EPA Clean Power Plan.

But how can they?

This approach appears much more viable because spending bills are harder to veto, especially those “must-pass” measures related to government shutdowns, according to Bloomberg BNA.

“The most effective way they have to accomplish their ends is through appropriations,” said Thomas Lorenzen, a partner at Dorsey & Whitney, who previously served in the Justice Department’s Environment and Natural Resource Division, where he defended EPA regulations, as quoted in the Bloomberg BNA article. “If you attach [a one-sentence de-authorization measure] to must-pass legislation, I’m not sure you’re going to get the votes to override a veto. If you attach it to funding, that becomes a much more difficult calculus for the White House.”

Also, if Republicans end up winning the Senate, Sen. Lisa Murkowski (R-Alaska), who has become a staunch opponent of climate regulations, “would be put in charge of the Senate Energy and Natural Resources Committee, where she would be likely to hold hearings on electricity grid reliability and other impacts of the power plant regulations.”

All of that said…

The outcome with the greatest probability? That legislative deadlock remains, with some predicting Congress to continue being “spectacularly” unproductive. But we can all hope – hope that real change comes.

RELATED: EPA Power Plant Regulation and US Economic Recovery: Why Jeopardize the Latter?