Well, the US isn’t facing a Russian invasion today, but it may be about to face a Chinese one, or at least the steel markets may. According to the FT Chinese steel exports were a record 8.52 million tons last month, an increase of 73% from a year earlier, according to customs data. Hit by slowing domestic demand, tighter environmental regulations and growing debt loads that are becoming harder to pay back from sales to the domestic market, China’s steelmakers are looking to export their way out of trouble.

A Chinese customs spokesman is quoted as saying the industry is mired in overcapacity, a position confirmed by Kevin Dempsey, senior vice-president of the American Iron and Steel Institute, who is quoted by the paper as saying, “as the Chinese economy has slowed they are looking to export the steel that they can’t domestically sell and that’s disrupting markets around the world.”

The wording here is important. China is not (yet) directly flooding the US market. Most of the increase is flowing into other Asian markets, but in the process it is dislodging sales from these markets and not only pushing producers there to look for new outlets, but depressing global prices in the process. 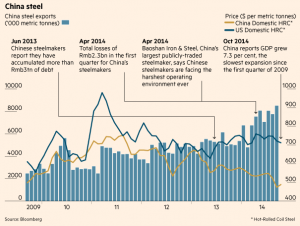 US steel prices have held up relatively well this year compared to global levels, in part due to the more robust nature of the US recovery compared to the slowing growth trends in much of the rest of the world, but that could be set to change if China does not take action to slow the flood of steel exports. Beijing would face opposition from state governments if steel producers were prevented from selling excess production abroad. States are dependent on the tax stream from steel mills in the form of value-added-tax (VAT), not to mention local employment where steel mills may be the largest employer in the area.

One tool at Beijing’s disposal could be to withdraw the tax rebate offered to exporters of some steel products, a move, no doubt, US producers would prefer to see rather than the enforcement of anti-dumping measures which may limit US imports but would then increase pressure elsewhere. Trying to effectively police such a system also has its challenges, steel can be sold to other Asian markets or Mexico, undergo minimal processing and come into the US as a semi-finished product displacing domestic production in much the same way as a direct import. Controlling exports at the source would be the preferred option if Beijing can be encouraged to act swiftly enough.

US hot-rolled coil prices have fallen 5% since the start of the year, the article reports, while prices in Europe have dropped 13%. It is no surprise, though, that the price in China has dropped 17% as demand has been overwhelmed by supply and any pretense at market discipline has been undermined by rampant domestic competition and state support for local champions. Overall, the difference between US steel prices and global prices is the widest in more than 40 months, quoting data from Bloomberg. How long US prices can weather the storm remains to be seen. Macquarie Bank is quoted as estimating US net steel imports rose 66% year-over-year between January and August, some from China, but much displaced from other Asian and even European producers.

Russians Are Not Coming

One door that is being closed is Russia.

A Reuters report this week states the US Department of Commerce will terminate a 15-year-old deal sheltering Russian flat-rolled steel producers from high import duties. The US gave Russia 60 days notice of the termination and said anti-dumping duties would then apply. According to Reuters, the suspension agreement has sheltered Russian steelmakers from anti-dumping duties as high as 184.56% on hot-rolled, flat-rolled and carbon-quality steel. It is a sad irony for Russian producer Severstal that, having just sold its US mills to AK Steel and Steel Dynamics this summer, it now looks like it will lose its ability to service the market from its home base in Russia. It will face anti-dumping duties of 73.59%, the article says.

The effective loss of Russian supplies from the end of this year will support domestic steel prices for some products and help, for now, to maintain the divergence between the US and the rest of the world. But the US is not an economic island, and the domestic steel market will continue to feel pressure from global steel markets creating a drag on prices next year.

PREVIOUS POST:
Copper MMI®: Resilient Copper Closes a Strong Week, Could be Poised to Break Out
NEXT POST:
US Midterm Election Outcome to Roll Back EPA Clean Power Plan?