Coal India Limited, said to be the largest coal producing company in the world, formed out of the nationalization of private enterprises in the 1970’s.

It employs over 350,000 and produced more than the top 3 US producers combined in 2012-13. Nevertheless, the government believes Coal India is part of the problem in India’s energy supply dilemma. The country’s voracious demand for power will only rise as the country becomes wealthier. 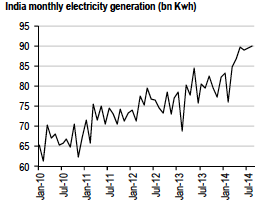 Yet according to a report in Coal Investing News, India holds the fifth-largest coal reserves in the world, but is still the third-largest importer of coal globally, only marginally behind Japan. In spite of sitting on vast coal reserves, India will import 137 million tons according to HSBC estimates and is set to continue rising through the end of the decade 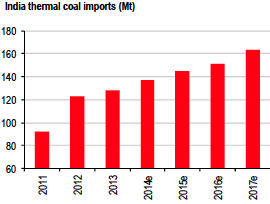 The government can clearly see the lunacy of this situation and is hoping the break up of the Coal India behemoth as part of the solution, throwing the industry open to competition, private investment, modern technology, finance and working practices. But 2 major issues remain.

First, those modern working practices, like nationalized industries the world over unionization is deeply embedded in Coal India, the Indian National Mine Workers Federation has already boasted it will stop legislation going through parliament to enable the breakup from going ahead. The other issue is logistics, as Macquarie Bank is quoted as saying poorly connected and inefficient railroads already result in stockpiles in some locations and shortages in others, increasing output alone will only exacerbate this problem.

As with so much else in India, infrastructure is a large part of the problem keeping the country from reaching its potential