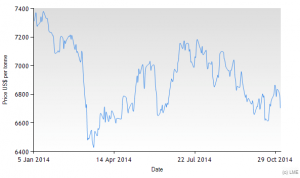 The copper market has been performing much as predicted, prices have fallen as a general trend this year. A sudden sell-off in March caught most by surprise, but in spite of a recovery prices have trended downwards since the summer much as expected.

Slowing demand in China is the principal reason, as consumer of nearly 50% of the world’s copper a 0.1% slowdown in GDP growth is read as a substantial drop in copper consumption, particularly as stimulus-supported infrastructure projects have largely been completed or at least material purchased. In China, half of all copper consumption goes into power transmission of one form or another.

While current price weakness was predicted, where it goes from here is the subject of considerable debate. The popular view is a surplus of concentrate will keep the market well-supplied and slowing demand growth will be unable to provide the impetus for an increase in prices anytime soon.

Certainly, recently concluded TC/RC prices achieved by smelters have been high, supporting the view of a market well-supplied by concentrate but even within that picture there are issues. HSBC, in their latest Quarterly Mining and Metals Review, advises the concentrate market has been complicated by quantities of dirty concentrate from new mine start-ups in Chile and the interruption of concentrate flows from Indonesia.

While the latter has since been resolved, arsenic content in ores remains a challenge for miners as it has to be blended with cleaner grades. Tight scrap availability has also kept the cathode market tight, a situation that is unlikely to ease while copper prices remain low. We are experiencing a mini boom in mine expansion, but delays and falling grades have meant the increase has not been as sharp as some predicted.

HSBC has downgraded its estimates of mine growth for the next 2 years to 3% in 2015 and 4% in 2016 from 6% and 2%, respectively illustrating how plans have been pushed back.

Demand growth on the other hand has been remarkably robust in spite of slowing growth in emerging markets and falling consumption in Europe. 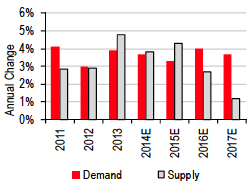 Demand is expected to outstrip supply from about 2016 onwards and with limited supply side growth. This will result in prices cycling higher in 2017 in HSBC’s view, to an average of $8,500 per metric ton. Clearly prices 2 years out are of no threat to buyers no,w but the expectation that prices have probably hit or are near the trough may influence buying decisions over the next 6-9 months.

Current cash premiums in Europe are down at around $50-100 per ton versus US$70-100/ton in early September and trade inventory is plentiful. Although metal has been flowing out of the LME, Chinese holders of the metal are exporting in the wake of the scandal at Qingdao port leaving us guessing what is real consumption and what is apparent consumption.

Either way, there does not seem to be any shortage of inventory. The rise in the dollar is certainly depressing prices more than would otherwise be the case but with dollar strength likely to continue prices are likely to remain under pressure from that quarter. For the time being, following the trend down is probably the best approach but higher RC/TC charges and tight scrap will likely limit substantial further weakness next year.

PREVIOUS POST:
Can Nickel Prices Find A Floor?
NEXT POST:
Anglo-American Has Suitors for its Chilean Copper Assets