Home | Company News | Creative Destruction: The Robots are Coming to a Job Near You
Commentary

Creative Destruction: The Robots are Coming to a Job Near You

Accepting that in most areas of both business and technology the US is a few years ahead of Europe, the findings of recent research carried out by the accountancy firm Deloitte and Oxford University has even more urgent implications for low skilled workers in the USA than elsewhere, particularly in the manufacturing sector.

A report by the London Telegraph on the research findings leads with the line 10 million British jobs could be taken over by computers and robots over the next 20 years, wiping out more than one-in-three roles. Those most at-risk are, not surprisingly, repetitive positions where the role can be automated, a trend that has been underway for the last decade or more but which will accelerate as technology advances. 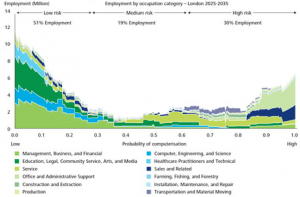 Nor are these necessarily manual roles in a factory. We are all familiar with robot assembly lines, but older readers will remember the prevalence of office typing pools, they just don’t exist today, nor tomorrow the report says will secretaries. Indeed Angus Knowles-Cutler, a senior partner at Deloitte, is quoted as saying “In London we found that since 2001 65% of librarians have gone, and almost half of all Personal Assistants and secretaries.

We would even take issue with some of the report’s findings suggesting they are too conservative. For example, the graph suggests job losses in farming will likely be limited, but if automated ore carriers can replace driven trucks in mines or driverless cars replace driven cars on roads, why can’t automated tractors replace farmers plowing fields? Almost any manual role has the potential for replacement, even skilled roles like surgery can be made more efficient with robotics reducing the number of surgeons required, likewise computerized diagnostics can improve the efficiency of general practitioners increasing their efficiency. 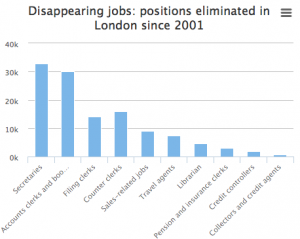 Broadly, the report suggests those at-most-risk are those that entail repetitive processing, clerical duties and support services in sectors such as administration, sales, transportation, construction, mining, energy and production. While those at-least-risk should be those in computing, engineering and science – not least of which because they will be developing these technologies and more broadly are roles which need creative thought or interpersonal skills.

Other safe positions are those in skilled management, arts, media, law, education, healthcare and financial services. But here’s another thought: a great teacher can be transformational for a pupil in stirring their imagination and instilling a desire to learn, but a bad teacher can, at the very least, dull the desire to pursue a topic. Look back on your own experience, I bet there are more of the latter than the former.

Computer-generated avatars will never be as good as the former, but arguably would be better than the latter, increasingly education delivered over the internet, with the possibilities of personalization that sophisticated computing power could provide may even reduce the role of humans in the classroom, driven if nothing else by cost.

The degree of disruption such technologies will bring will depend in part on the speed of introduction. In the UK, according to official figures, employment stands at 30.76 million, if the report is right and 10.6 million people’s jobs are at risk the effect would be profound if it occurred over a 10-year time span, if the numbers were only half that and it took 20 years society would likely adapt with retraining and the creation of new roles. In your own industry, look around you. With a little imagination, it is possible to see many roles that could either be fundamentally altered or disappear altogether. We measure change often on a very limited timeframe – there are only marginally less secretaries around now than 12-18 months ago. You don’t notice any difference, but look at it over a 10-year timeframe and it becomes profound. In addition, if spread over a long enough timeframe and with robust GDP growth, the changes are easily absorbed by new job creation, but with global GDP growth slowing the loss of jobs will be more painful. We have to hope new technology will create as many new jobs for workers as it destroys.