The Gold market may seem like it’s in terminal decline but although prices have continued to fall the dynamics have been anything but one-directional. As prices have fallen, gold miners have been desperately reducing their cost of production, down from $1,200/ounce in 2012 to $1,050 today according to Goldcorp quoted in an FT article.

As such, supply has continued unabated in spite of falling demand. Not that demand across the board is down, there are bright spots according to the Telegraph. Central banks have been buyers as some try to diversify away from dollar holdings and others, such as Russia, have tried to shore up their currency.

The paper reports Russia added 55 tons in the three months to the end of September out of a total central bank take of 93 tons. What the article doesn’t say is that much of this was domestically produced gold that would historically have been traded through the major Russian banks and exported but sanctions have crimped that trade and the central bank has stepped in to take metal off the banks’ hands.

Nevertheless, it won’t harm the Ruble and, at 1,150 tons, puts Russia’s reserves at a substantial level even after the value of the yellow metal has fallen. By the end of the year, central banks will have acquired up to 500 tons of gold during the latest buying spell, according to Alistair Hewitt, head of market intelligence at the World Gold Council quoted by the Telegraph, he added “Central banks have been consistently adding to their gold holdings since 2009.” 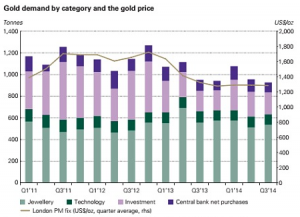 So demand is strong right? Wrong, central bank purchasing may be up, but their volumes are dwarfed by investment and jewelry demand. Chinese buying is down, retail consumption fell by a fifth to 754.8 tons in the first nine months of the year compared with the same period last year, according to the China Gold Association.

After two sell-offs in April and June of 2013, the gold price dropped by almost 30% and Chinese buyers, sensing an opportunity, jumped in buying heavily expecting the price to bounce. It just kept falling, this year the price decline has been nowhere near as severe but Chinese buyers have stayed on the sidelines, it would seem firmly in the belief that it has further to fall. The FT reports in recent days bullion on the Shanghai Gold Exchange has traded at a discount to the price in London, taken by analysts as a negative sign of future direction. 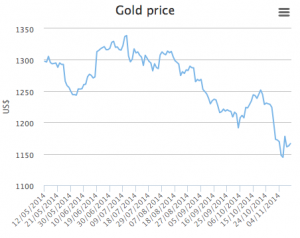 Furthermore, our understanding of Chinese demand may have been distorted, as with so many metals, by the gap between real and apparent demand. A report published by the World Gold Council earlier this year and reported by MetalMiner and the FT, found that Chinese companies could have accumulated up to 1,000 tons of gold for use as collateral in financing deals rather than to meet consumer demand in recent years.

The study claimed imported bullion was being used “to raise low-cost funds for business investment and speculation,” and was part of the wider growth in shadow banking in China. So China’s claim to be the world’s top consumer in 2012/13 may not be entirely valid, anyway. This year India is coming roaring back. In the third quarter of this year, jewelery demand ahead of Diwali and the marriage season surged 60% (admittedly over last year’s import ban-depressed levels) with total Indian gold demand hitting 225 tons, overtaking China’s 194.1 tons. Of that 225, 182.9 tons was for jewelery and the country had to import 150 tons in October to meet demand. Unlike China, India’s appetite doesn’t seemed diminished by the possibility the price may fall further but the government may yet step in to slow imports as the balance of payments takes a beating when gold imports surge.

In spite of India, global gold demand was down 2% in the third quarter according to the WGC and only perennial bulls are predicting a sustained recovery in the short term.