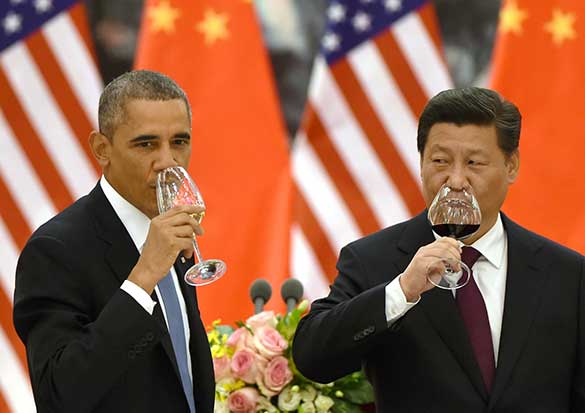 Which contributes more GHG to the atmosphere, red or white? Photo credit: Greg Baker for the NY Times, http://www.nytimes.com/2014/11/13/world/asia/climate-change-china-xi-jinping-obama-apec.html

In yet another global greenhouse gas (GHG) emissions reduction development – of which there have been several in the last few weeks and months – US President Barack Obama and China President Xi Jinping came together over some white and red wine, respectively, to set another arbitrary goal with few accountability measures in place.

(Obama, perhaps still reeling from his post-midterm-election headache, apparently wants to avoid the tannins if he can.)

FREE Download: The Impact of Regulatory Issues on the Future of Supply Management

But back to the US-China climate accord. The “How-Big-a-Percentage-Reduction-By-When” game went this way: Mr. Xi said China would stanch the country’s carbon dioxide emissions so that they peak “around 2030,” according to the NY Times, while President Obama promised a 26% to 28% reduction in US emissions by 2025, from 2005 levels. (The EU also recently pushed through a promise to reduce emissions 40% by 2030.)

That’s all well and good, but in the context of strict proposed US regulations such as EPA’s Clean Power Plan (CPP), which only apply to producers and manufacturers in the US, let’s stop at the notion of having the world wait at least 15 more years for China’s emissions to peak. Consider the NY Times graph below: 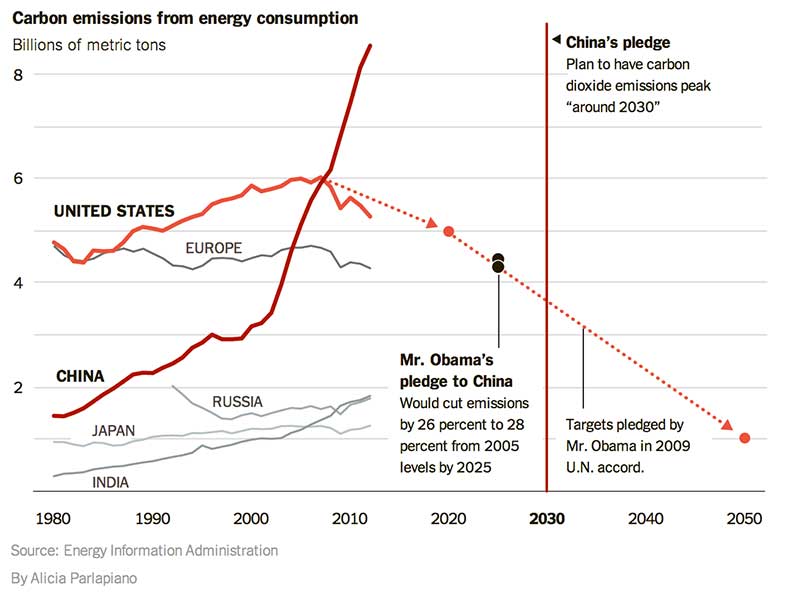 Needless to say, China’s the main culprit when it comes to emitting carbon. The crux of the issue here, as reflected by the graph above, is the space between the point at which we are today, and the point at which we will likely be in 2030 – there will be a gigantic chasm between where US emissions will be, and where China’s will be.

The US’ emissions, in billions of tons of CO2, are already on the decline (before EPA’s Clean Power Plan is even enacted), and have been since about 2007-8. According to a recent Energy Information Administration (EIA) report, US emissions have been in a long-term downtrend, and are on track to achieve a 30% reduction below 2005 levels by 2030 without EPA’s CPP needing to be enacted.

Even without the CPP, this article notes that “the EIA estimates that 40-60 gigawatts (GW) of coal-fired electric capacity will be retired between now and 2020. According to the EIA, most of it will be replaced with natural gas. Natural gas has already reduced CO2 emissions more than renewables and at a lower cost to consumers and taxpayers.”

China’s emissions, on the other hand, will most likely continue to rise dramatically until 2030 – and, according to some experts, that won’t even be the peak. According to the Times, a couple of studies, one from the Lawrence Berkeley National Laboratory and another from the Massachusetts Institute of Technology, point to China’s peak not coming until sometime between 2030 and 2035. The former study predicts annual carbon output of 12 billion tons by 2033, while MIT predicts a peak of 10 billion sometime between 2025 and 2035.

Since the earth’s atmosphere does not take a nation’s geographical borders into account, it stands to reason that China’s pollution over the next decade and a half will all but swallow any emissions reductions from most of the rest of the globe combined.

Renewables the Answer? Not So Fast.

Chinese President Xi promised that 20% of China’s energy will be renewable by the time the country’s at its emissions peak. But according to researchers such as Li Shuo at Greenpeace East Asia, as quoted by the Times, Xi’s 20% goal “was ambitious.”

According to Li, China “would need to add 800 to 1,000 GW of power generation capacity from renewable sources over the next 15 years to meet the goal — a remarkable figure, given that the country now has a total of just 1,250 GW of capacity from all sources, most of it coal-fueled.”

Now that’s some food for thought.

PREVIOUS POST:
Anti-Dumping Actions Show That China Must Get Its Steel Production House in Order
NEXT POST:
China’s State Reserve Bureau is Buying Copper Again as Prices There Fall