Home | Minor Metals | Tin: The Deficit That Never Was
Commentary

Tin: The Deficit That Never Was

Consumers of tin-containing products such as the solder industry, chemicals and tinplate must be counting their good fortune at the trend in prices this year. That is, if they didn’t heed most of the analysts’ advice and cover forward a year ago.

This time last year, most people were expecting the market to rise. Indonesia was applying a supply squeeze by cracking down on illegal miners and requiring exports to be refined to a certain standard before prior sale through the domestic exchange, the Indonesia Commodity and Derivatives Exchange (ICDX).

Although Indonesia is the world’s largest tin miner, China is the world’s largest refiner and consumer, so an Indonesian squeeze coupled with a lack of new mine capacity was expected to generate shortages and price rises as the Chinese economy continued to expand at 7%+ last year and well into this year. Investors were long in the market and, like most consumers, were caught on the wrong side of a price fall. 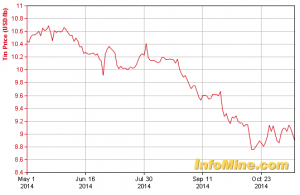 The crux of the “problem” is that the expected shortfall never materialized. According to a Reuters article, despite Indonesia’s best efforts to limit exports, including a brief moratorium on sales in September, shipments have fallen by only a marginal 10% so far this year. The World Bureau of Metal Statistics reported in October that in the January-to-August period the market recorded a 500-ton surplus.

By this month, the January to September estimate was 1,900 tons. Meanwhile, those investors building long positions earlier in the year have been unwinding them since the early summer. So what has changed from the view earlier in the year? China has changed, perhaps in anticipation of the expected Indonesian squeeze, perhaps more just a matter of timing. Investments in Myanmar are coming to fruition. Raw material imports from that country into China have risen this year just as demand has cooled.

As a result, China’s exports, mostly of alloyed product, have risen, estimated to be as much as 8,000 to 9,000 tons in the January to August period, displacing refined metal and alloy sales from other sources and perpetuating the LME’s price weakness.

As prices fall there is probably a limit to China’s willingness to export metal and the draw down of domestic stocks should reverse at some stage if global prices drop to a level consumers deem a low point and worthy of re-stocking, but that point probably hasn’t been reached yet. Although, Reuters speculates that tighter export controls in Indonesia and a slowing of the alloy exports from China suggest that point is not far off. 2015 may, therefore, be the year that tin prices show upward momentum again. Keep an eye on the LME’s COTR reports for investors taking long positions again, that could be a key indicator of a change in market sentiment.

PREVIOUS POST:
Commodities at Their Lowest Levels In 4 Years
NEXT POST:
Automotive MMI®: US Steel Hires a New Automotive Executive