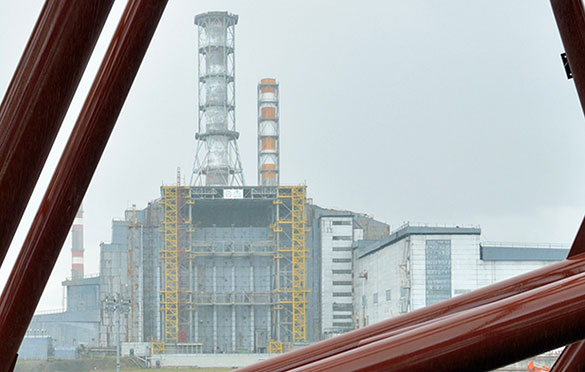 A peek at Chernobyl Reactor No. 4 from behind the New Safe Confinement structure. Source: Novarka

Back in 2004, as an undergraduate student working on his thesis in Ukraine, I was offered an unsanctioned ride to Chernobyl.

Rather than jump through the hoops and pay money for a sanctioned tour of the Exclusion Zone, like many others, I was on the lookout for folks willing to drive me up for free. The only person who offered, a former Russian soldier from Chechnya named Sergei who was living on disability and spending the majority of his time being drunk, didn’t seem…well, the most trustworthy. (“Welcome to Ukraine,” amiright?) I was working on a documentary-style play chronicling the effects of the Chernobyl nuclear accident on Ukrainian citizens nearly 20 years on, and figured I should at least see Ground Zero.

Back then, I would have only seen the unattractive concrete “sarcophagus” that the Soviets hastily built to cover Reactor No. 4, the one that infamously blew its lid on April 26, 1986. However, these days, it would be a more interesting venture, if only to see the massive steel arch that 40+ countries have pitched in to build over the sarcophagus (and the 200+ tons of still-radioactive material buried underneath).

The arch is officially called the Chernobyl New Safe Confinement (NSC), and the latest work on it is detailed by this video published by the Economist:

According to Novarka, the 50-50 venture between Vinci Construction and Bouygues Travaux Publics, here are the deets behind the physical arch:

Quite a Steel, Stainless Sourcing Project

ArcelorMittal provided a good chunk of the metal for the NSC, the frame of which consists of “a tubular steel lattice secured by two longitudinal concrete beams and will support the two layers of steel cladding,” according to the producer. “For the next 100 years, this cladding will ensure that no residual radioactive material can escape the reactor core.”

By 2017, the NSC arch should slide into place via pistons and rails, and as indicated by the presence of stainless in the mix, has been designed not to rust. Laurent Grygiel of Novarka explained in the video that engineers are keeping an air pocket between the two layers of steel, which will be kept to less than 40% humidity to keep beams from rusting.

The catch? This will take constant electrical power to maintain for 100 years – not a sure thing in politically and economically fraught Ukraine.

Another catch? The 200+ tons of radioactive material still inside the old Reactor No. 4 must be removed at some point, but the project’s leaders and directors of the power plant are expecting that to be the purview of advanced robots.

As Stuart Burns writes here, bring it on!

Free: Build Your Own NSC – Use Our Service Centers Guide
{2 comments }