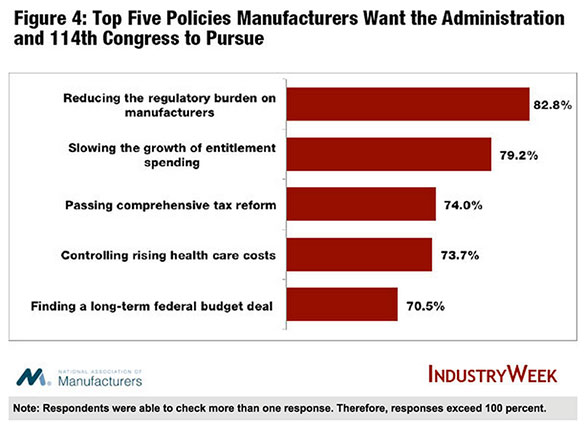 Chad Moutray, chief economist for the National Association of Manufacturers (NAM), laid out yet another piece of evidence showing how we live and work within the most regulated climate in history – look no further than the chart above – in his recent recap of the NAM/Industry Week Survey of Manufacturers.

Overall, the survey results reflect an optimistic environment among manufacturers, with more than 90% in good spirits about their company’s direction next year. But the fact that the majority of manufacturers cited “regulatory burden” as the No. 1 thing they’d like Congress and the Obama Administration to pursue in 2015 says a lot.

MetalMiner has been reporting on the regulatory climate (see our latest on EPA’s proposed Clean Power Plan here) and how the uncertainty behind other such regs has manufacturers scratching their heads, trying their best to guess the risks involved.

To that very first point, we’ve been talking to a lot of folks recently about the need for a cohesive and effective US energy policy, especially in light of what’s happening in China and other polluting economies, and we’ve seen that EPA’s Clean Power Plan has the potential to add a lot of costs to the system.

Next Up: EPA Ozone Regs

Now, EPA has proposed new, stricter tightening of ozone regulations, targeting “sources including power plants and car and truck exhaust to within a range of 65 to 70 parts per billion (ppb), down from 75 ppb currently — or around a 10% drop,” according to an Agence France-Presse story.

The National Association of Manufacturers said the new ozone regulation “threatens to be the most expensive ever imposed on industry in America and could jeopardize recent progress in manufacturing.”

The battle between EPA and manufacturing continues!

FREE RESEARCH DOWNLOAD: The Impact of Regulatory Issues on the Future of Supply Management

PREVIOUS POST:
The Other Side of Low Oil Prices: Fewer Exploration and Pipeline Projects
NEXT POST:
Monthly Stainless MMI® Falls as Nickel Prices Find a Floor