Home | Investing Hedging | Greece, Back in the Limelight For All the Wrong Reasons
Commentary

Greece, Back in the Limelight For All the Wrong Reasons

2014 saw a number of geopolitical developments that spooked the markets. Generally negative, they created uncertainty and increased risk for investors and consumers alike, not always in metals but sometimes in stock markets that then impacted investor sentiment in metals and other commodities.

Think the Ukraine-Russia situation, ISIS in Iraq, tension between China and Japan in the South China seas, the Ebola epidemic and China’s falling property market. What could 2015 hold? One potential source of instability is back to our old friend Europe.

A degree of political and, hence, economic stability appeared to have been achieved in Europe this year, fears periodically salved by Mario Draghi’s “we will do whatever it takes” assurances – which actually amounted to nothing, but have been enough to ease tensions and allow sovereign bond rates to drop to comfortably low levels. Yet there is lack of alternative investment opportunities forcing money into sovereign debt as the only source of any yield. Some parts of Europe still have serious problems and events this week suggest one has the potential to blow up big time around the New Year.

This week the Prime Minister of Greece, Antonis Samaras, announced a surprise snap presidential election following months of stalemate and infighting among his coalition partners. His governing coalition holds 155 votes, he needs 180 and is hoping to persuade 25+ independent and fringe party ministers to support him. If he fails to win sufficient support for his candidate, an early general election could follow, which investors fear will bring to power the radical left Syriza party. The prospects of a Syriza government promptly sent the Athens stock market into freefall, triggering the steepest drop since 1989, falling 12.8% according to an FT article. 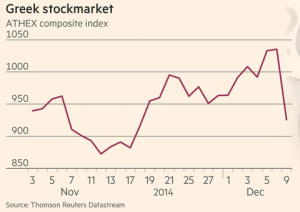 Syriza wants to renegotiate the country’s sovereign debt and hike public spending, moves which would put Athens at loggerheads with its creditors the FT says, while quoting Charles Robertson, chief economist at Renaissance Capital as saying “A possible Syriza election victory may force the Euro-zone to choose between a fiscal union (debt write-off for Greece) or the first Euro exit.”

The EU is putting a brave face on it saying they are sure Mr. Samaras would not have called the snap election if he was not sure of winning it. Clearly the stock market is not so confident of that. Greek debt is barely above junk status with borrowing costs are the highest in Europe. Government debt will peak at 174% of its national output this year — a record debt to GDP ratio for the Euro zone and with rates at currently at over 8%, probably unsustainable in the longer term. 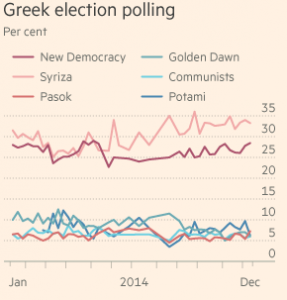 Syriza may find heckling from the sidelines easier than running the government. Promises to increase the minimum wage by 50%, provide free heating and electricity for poor Greeks and create more public sector jobs have given Syriza a 4-9 percentage point lead in opinion polls, but even many Greeks worry such an agenda is unaffordable, a separate article says. Meanwhile Greece’s final bailout payment has been postponed for 2 months. Greek banks are totally reliant on the European Central Bank, so it is no exaggeration to say Greece’s future rides on the outcome of this month’s elections. A Greek exit would send shockwaves around global financial markets and open the door for possible exit by other countries in the Euro zone if the unthinkable happens and the first country leaves.

PREVIOUS POST:
Stainless MMI®: Most Predict Lower Prices in 2015, But Glencore Says Deficit Will Go On
NEXT POST:
What Do Falling Oil Prices Hold for the Metal Markets?