As Lynas Corp’s Founder Gets Outta Dodge, Here’s the Best Of Rare Earths 2014 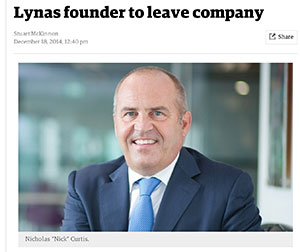 Screenshot from The West Australian’s coverage.

Recently, Lynas Corporation founder and chairman Nicholas Curtis signaled that he’s fed up with the down-in-the-dumps, low-price rare earth metal market (our cheeky and unfounded speculation) by announcing his departure from the company after 14 years (according to the West Australian’s reporting).

As both Curtis and MetalMiner say goodbye to the REE market of 2014, we thought we’d take the opportunity to recap the year with a Best of Rare Earths selection.

What the Year in Rare Earths Prices Looked Like

In short, not awesome for Western rare earths producers, such as Lynas and Molycorp. For buyers, the deeply discounted REE complex is only made better by the prospect of going even lower; MetalMiner’s Rare Earths MMI® is having a hard time finding a true floor.

MetalMiner Editor at large Stuart Burns on China’s role in this whole thing:

“While it is not impossible prices could rise this year, the reality is China’s export quota has not been fully utilized for a couple of years now. Reports that exports fell 9.7% are not a result of restricted supply, but of muted demand. Consumers are getting more savvy about switching to non-REE technologies, alternative supplies from Molycorp and Lynas are rising and the speculative interest in REEs has waned after many got their fingers burned in the aftermath of the last spike.”

2. MetalMiner on cerium and lanthanum…

In an interview with Asian Metal’s REE analyst Zachary Schumacher, we learned a bit more about buyer-supplier dynamics:

“US buyers (big ones such as BASF, and even smaller ones) can easily access the Chinese market and negotiate to buy greater volumes at lower prices; and Chinese suppliers are more than willing to part with their supply. Indeed, US traders such as PIDC and Blue Line buy up tons of material from China in year-end “closeouts” before the next quota, according to Schumacher. So for most buyers, there’s plenty of cheap and easily accessible lanthanum floating around.”

3. MetalMiner on a Celebrity Deathmatch (of sorts)… 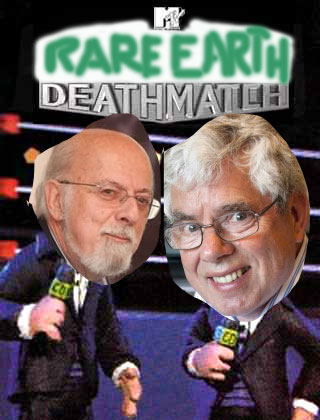 We pitted REE heavies Jack Lifton and Dudley Kingsnorth against each other in a fictional battle to the (non-)death:

“Both gentlemen are esteemed and renowned analysts in the rare earths space, and each may have good points – until that Chinese domestic consumption boom that Jack talks about fully hits its apex, we may continue to see these dropping prices – the question is, are these depressed price trends a vote of confidence for any Western producers to begin supplying global markets?”