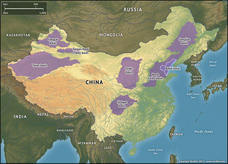 It almost seems counter-intuitive, but when poor growth results come out of China there can often be a mini rally in prices as investors bet poor growth will necessarily mean more stimulus by Beijing.

As a recent article in the Telegraph newspaper noted, the final figures for 2014 suggest China will probably turn in a 7.4% growth rate for last year, the lowest since 1990. Not surprisingly iron ore, coal and copper – commodities for which China is by far the world’s largest consumer – have all fallen in 2014. Take iron ore for example, slowing demand and rising supply have resulted in prices falling by 47% last year to $71 per ton now.

The surplus in iron ore supply is expected to widen to around 300 million metric tons of ore by the end of 2017 as major producers such as Rio Tinto and BHP Billiton continue to consolidate their output into bigger and more productive mines to reduce per-ton production costs.

Over the last year, the IHS Material Price Index for commodities has fallen 20%. The advisory firm’s chief economist, Nariman Behravesh, is reported as saying he expects that commodity prices will slide by a further 10% on average in 2015, despite the increasing chance that China’s government will underwrite a massive stimulus program to revive growth.

But we question this prevailing philosophy, how probable is it that Beijing will come riding to the rescue of the commodity bulls? Throughout 2014 China made it clear they are seeking to steer the economy away from export-led growth and towards domestic consumption. It is widely accepted this will result in lower growth but a more balanced and sustainable economy in the long term.

Having already taken much pain and achieved significant progress why would Beijing do a U-turn and pump investment into the economy? Particularly into areas that encourage industrial expansion where the country already has massive over-investment and excess capacity. Rules around bank lending and interest rates may be slackened to revive, or at least stabilize, the housing market, but Beijing is not going to oversee a boom in construction again. That caused no end of problems in the past and is unlikely to be tolerated this year.

Furthermore 7%+ growth is still a substantial driver of new jobs in the second-largest economy in the world, particularly when China has such poor demographics regarding new workers coming into the workplace. The rate of peasants coming to the cities has slowed as growth has moved westward inland, so the need for 10% growth rates is not what it was 10 years ago.

In short, we see this obsession with 7.5% plus growth rates and the implication that anything less will result in massive stimulus measures absurd, and feel we should become used to slower growth in China with all that it implies for lower metal demand growth in the second half of this decade.