Home | Commodities | Another Restful Year for Lead? Or Will Buyers Lie Awake at Night?
Commentary

Another Restful Year for Lead? Or Will Buyers Lie Awake at Night?

Consumers like nothing better than a flat raw material supply market.

Yes, rapidly falling prices, the finance department will tell you, are the best option. Yet, for buyers they raise challenges of when to buy, how much to buy, when the market will bottom out and more. Often with multiple metals, and sometimes even multiple products, to track and make judgments on, buyers will not object to one or two of them staying flat or in a gentle decline.

Of course, the danger is that no movement encourages a lack of interest and a lack of interest can result in a sudden shock if prices move unexpectedly. So, hopefully, readers will excuse us for covering a metal, lead, that has done no more than track the market these last 12 months if only to try and make a judgment on how long it may continue. 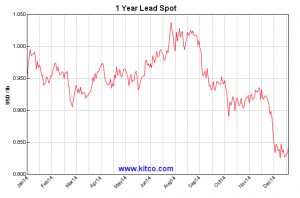 Prices have not been flat. After gradually following an across-market rally in the first half, prices have drifted off in the second, but by a number of measures lead has underperformed these last 12 months. As Reuters noted in a recent article, London Metal Exchange lead volumes have been on a downward trend, having slipped another 0.5% last year after tumbling by 9.4% in 2013.

Indeed, lead was the only major LME-traded metal to have experienced two consecutive years of lower trading volumes, something of a stand-out given total volumes grew by 6.7% in 2013 and by another 3.5% in 2014. The reason is not a mass turn-off by consumers using the market, rather the lack of any clear narrative around lead.

This means investors (the key source of volume) can’t get excited about it or even make an informed judgment on where it may go next. Unlike its sister and often co-mined metal, zinc, which the International Lead Zinc Study Group (ILZSG) predicts will be in a 366,000-ton deficit this year, lead is only predicted to be in a 23,000-ton deficit. In a global market of 11,500,000 tons, that’s all but balanced. As a result, zinc whose fundamentals appear somewhat bullish, has disconnected from lead and the latter has sunk to a $300 per ton discount with the gap between the pair now as wide as it has been since the end of 2008 according to Reuters.

On the supply side, all of those zinc mines that have closed or are scheduled to close will inevitably mean some loss of lead production too. The new zinc-lead mines will not necessarily add lead in equal measure to zinc, either. According to Reuters, 7 major new mines will produce nearly 600,000 tons per year of zinc but only 20,000 tons per year of lead.

In theory, this should equate to lower supply, but part of the uncertainty in direction comes from the world’s biggest consumer and largest producer, China. Chinese demand is slowing. E-bike growth, believed to be a major driver of lead demand in the first half of this decade, is slowing and China has switched to being a net exporter of refined lead.

Lead mining in China doubled between 2009 and today, bringing the level supplied from domestic sources to 55%. The secondary lead market is notoriously difficult to read in the west and all but impossible in China, so the extent to which the secondary market has met what increase in demand for refined metal the global market has managed to create is hard to judge. Without any clear pointers, and what appears to be a pretty balanced supply market, it’s hardly surprising lead has failed to attract investor interest and the price has drifted ever lower.

As for the rest of the world, it’s unlikely the first half of 2015 will bring much to change the situation. Even in China there is no evidence to suggest supply will become constricted or demand will pick up. Reuters’ speculation that the recent level of open interest among positions on the Shanghai Futures Exchange suggests an uptick in activity or interest may be brewing is laced with caution. All in all lead, may continue to allow buyers to sleep at night in 2015… or at least lie wake worrying about other metals.