Perhaps more telling – import volumes for grain-oriented electrical steel have begun creeping up as well, climbing 21% as have exports – growing by 16% according to the most recent trade data from Zepol. 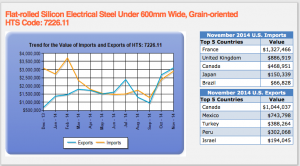 We also take note that the countries with the highest levels of imports were not part of the anti-dumping case filed by the domestic producers. With the exception of Japan – France, the United Kingdom, Canada and Brazil are the top 4 exporting nations to the US.

Not surprisingly the 2 top markets for US GOES exports included Canada and Mexico. Several large buying organizations moved transformer core production to Canada and Mexico in anticipation of an unfavorable trade decision. However, according to industry sources, the US International Trade Commission has now broken out HTS codes to differentiate between laminations, stacked cores and wound cores. MetalMiner will have more on this later in the week.

The implications of the breakout of the HTS codes is clear – the domestic producers may be contemplating further anti-dumping actions. Whether or not a domestic producer can claim anti-dumping for a product they don’t produce – such as laminations, stacked cores and wound cores – remains unclear.

The monthly GOES MMI® registered a value of 199 in January, on par with December’s value.