Iron Ore: How Low Can it Go?

Guest contributor James May is director of Steel-Insight.

Iron ore prices dropped 40% in 2014 (average 62% Fe fines Platts price cost and freight China) to average $97/ton. The peak-to-trough decline was even greater and prices are now below $70/ton. Some iron ore analysts now suggest that prices could go to $50/ton or even below. We don’t think that they will, and the Steel-Insight view is that they may drop below $60/ton for a short period of time, but that they will spend the bulk of the year trading between $65-75/ton.

The market is undoubtedly oversupplied and new projects are continuing to arrive, e.g. Anglo American’s Minas Rio project in Brazil (26 million tons per year) and Hancock Mining’s Roy Hill project (55m tpy), although they will take time to ramp up with 2015 output far below capacity. Both projects were at such an advanced stage prior to the price meltdown that they will start production.  Meanwhile, the Big Three of Vale, Rio Tinto and BHP Billiton all expect to increase production in 2015. It is reasonable to expect another 100 metric tpy or so of new supply.

However, to a significant extent these will be offset by cutbacks in supply that we believe are not being appreciated by the market.

Iron ore imports from outside Australia, Brazil & South Africa will total around 160m tons in 2014 – around 18% of total imports in excess of 900m tonnes. It is our view that these will more than halve in 2015. They are simply not viable at current prices. 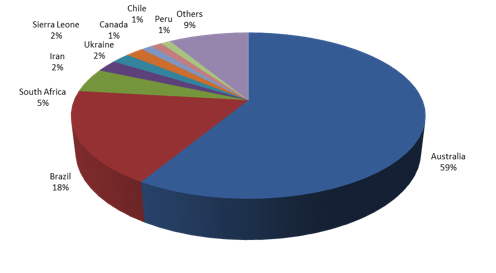 Finally, the cutbacks will be in Chinese iron ore production itself. Year-on-year output fell in November for the first time. Chinese output in January-February is always significantly lower due to seasonal closures in northern China due to winter weather, but they may not come back if prices stay low. It is our view that Chinese iron ore output in 2015 will be lower by around 20% year-on-year – taking around 80m tpy (of 62% Fe equivalent) out of the market.