Here at MetalMiner, we are enthusiastic about renewable energy schemes. It seems like common sense to develop energy sources that are not based on depleting reserves and that are sustainable from an environmental perspective.

What we take issue with is the payment of massive subsidies to support them. We would be the first to give recognition to the fact that not all technologies hit the ground running in terms of financial viability, whether because the science needs support to be developed or the industries need volume to achieve critical mass, there can and should be a role for the state (usually it’s the state) to get such developing technologies off the ground. But when there are competing technologies in various stages of development we get a bit hot under the collar at politicians committing us, the consumer, to footing the bill for what look like pet projects. Wind energy is one such energy source that gets us in a flap.

With 12 gigawatts of installed wind power generating capacity in the UK the country should be able to meet about 22-23% of its peak demand from wind. On a chilly day this week, the UK saw demand hit 52.54 GW between 5pm and 5:30pm, according to the UK’s National Grid, as reported in the Telegraph.

With mid-winter cold, you might expect the wind to have been howling and those turbines spinning, right? Not a bit of it. Wind contributed just 0.573 GW during the same time, just over 1% of the total. In stark contrast, the paper reports, gas accounted for 42%, coal for 29%, nuclear for 16%, pumped storage and hydro for 5%, and interconnector imports for 5% (the total doesn’t quite add up because of rounding).

Not surprisingly, at that time in the afternoon solar didn’t contribute anything, but that can be planned for as there are other times when the angles for catching the sun are better and solar will contribute. The failure is wind, which even at an average 28% of it’s installed capacity should have been contributing 3-4 GW. To be fair, on 2 other days during the month wind achieved a figure of 18% of peak demand for a while but here’s the issue; it’s that very unknown variability that’s the problem. As a result the UK (and most other mature energy markets) have to maintain an array of back up power sources, usually older, more polluting and expensive coal and natural gas generating plants. For this reason when Germany closed it’s base load nuclear plants in reaction to the Fukushima accident not only did power generation cost go up but so did CO2 emissions.

Renewables UK, which claims to be the voice of wind and marine energy says, as a whole, 2014 was wind energy’s most productive year so far in the UK, generating nearly 10% of Britain’s electricity. But at what cost financially and to the environment?

The National Grid is aware the 12 GW of installed capacity will rarely be fully productive, so they either have to carry the full 12 GW of capacity in reserve for times like this month when wind contributed almost nothing, or they have to continue to use other sources as base load and take wind when its available or pay the wind farms to switch off if there is too much. According to the Renewable Energy Foundation REF, a typical wind farm may receive £55/ megawatt/hr in subsidies for power it produces, but if asked to stop producing power because of an excess in supply the grid is typically required to pay the wind farm something like £220/MWh. Only a politician could see this as a good idea, meanwhile hardly a fraction of these massive subsidies have been spent on developing more predictable alternative renewable energy sources.

Not that the UK’s £1.2 billion ($1.8 billion) in annual subsidies is unique. The US also has its ludicrous energy subsidies. Some $5 billion is paid out each year for corn in ethanol subsidies, and the rest of Europe is busy subsidizing wind – an industry that shows little signs of closing the gap to viability without hand-outs. Here in the often overcast and grey UK, we can only look on with envy at those in brighter climes where solar is making a slow but steady improvement in viability that may yet see the solar industry become the most economically viable, widely dispersed renewable power source.

In the meantime, consumers are finally pushing back. A private members bill in the UK seeking to ban any further subsidies for wind power is due for its second reading in the House of Commons this March. While it is unlikely to come into law, the intent is to stir the debate further and force politicians to take the public’s concerns seriously. A similar backlash could develop in the US if power costs rise as a result of subsidies and competition from low-priced natural gas drives up the difference between wholesale prices and the level wind farm operators require to survive. 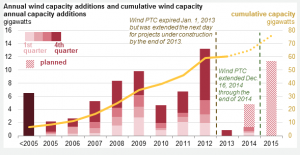 Wind farm construction has had a bumpy ride as subsidies have been allowed to lapse and are then reinstated for periods of time. If they are not maintained and supported by state mandates on power utilities to buy a certain percentage from clean energy sources then construction will falter again. Costs are coming down as turbines get bigger but the US, like the UK, is approaching the limits for reliance on such an unreliable energy source regardless of whether it may become economic at some distant point in the future.