Aluminum’s Parallel Universes and the Threats Both Face

This is part two of an examination of high physical delivery premiums in the aluminum market. Read Part One for more background.

To say the aluminum market is a game of two halves is maybe a silly distortion of an equally silly saying, but in many ways the market in China and the market in the rest of the world almost exist in distinct but parallel universes. A graph from HSBC’s excellent “Quarterly Global Mining and Metals Review” illustrates the point rather well. 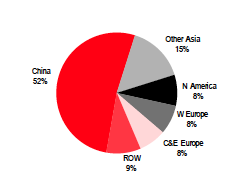 China’s Aluminum producers should dominate the global market place, the country manufactures some 52% of the world’s aluminum and indeed consumes almost the same percentage. Yet due to Beijing’s 15% export tax on primary forms of the metal almost no primary metal, and comparatively little semi-finished metal, enters the rest-of-the-world market.

Taken as a whole, the aluminum market is so heavily skewed toward Asia, cumulatively two-thirds of global production, that we could be forgiven for thinking what happens elsewhere is almost inconsequential.

Yet, in reality, it is the tight nature of the North American market, just 8% of the whole, that is driving sky-high physical delivery premiums, as we mentioned in Friday’s post. Asian consumers, as a result, are having to pay ever-higher premiums in spite of high inventories and cooling demand.

Even with the rapid decline of the once-vibrant South American aluminum market —particularly the producers in Brazil — the contraction going on in parts of Europe and the accelerating recession in the former Soviet states, nothing appears to be slowing the rise of physical delivery premiums. 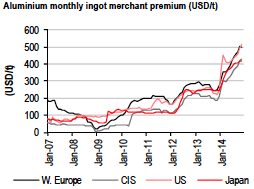 In our recent post we laid the blame firmly at the door of the stock and finance trade which is exacerbating market tightness caused by smelter closures and buoyant automotive and aerospace demand by continuing to squirrel tonnage away in opaque off-market storage. In HSBC’s view, though, that could slow in 2015, forward London Metal Exchange spreads are closing again as this graph from the bank shows. 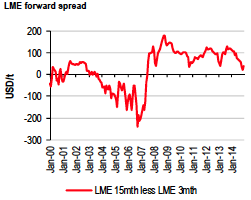 In previous periods of narrowing spreads, the trade has paused and if spreads remain tight, we could see an increase in metal coming to market as expiration dates from this trade come to maturity but fail to be rolled over.

After considerable volatility the bank sees the total aluminum price (LME+Premium) remaining in the $2,400-2,500 per metric ton range during 2015. If physical delivery premiums remain around $525, as is widely expected, that supposes an LME price of around $1,900-1,950, and, indeed, the average bank is predicting a 2015 price 0f $1,909/mt rising to $2,014/mt in 2016. This $2,400-2,500 total price range seems a comfortable one for the smelters at current raw material and power costs, yet not sufficiently attractive to lure a major swath of shuttered smelter restarts.

The US Market is Not a Rock

Meanwhile, although the US is growing strongly it is not an island. Not economically, and with Europe in the grip of deflation, Japan stalled, China slowing, South America with mixed fortunes but little sign of strong growth, it is unlikely the US will be able to maintain late 2014 levels of growth.

Recent company announcements have warned of the downside to a strong dollar on company profits. The benefits of lower energy costs will be mixed, some higher energy uses will benefit but firms with a more global footprint will not fair so well. Corporate America is therefore not going to be firing on all cylinders in 2015 and may find itself posting profits at home but losses overseas a situation that will challenge investment and continued levels of strong growth.

Meanwhile, China is under pressure to close high-cost production capacity but even in the face of moderating demand growth some 7.5 million metric tons of potential new capacity could come onstream between 2015 and 2017. So far, Beijing shows every sign of maintaining that pressure to rationalize and not allow exports to be an escape valve. But even so, semi-finished exports have picked up from 3 metric tons/year between 2011-2013 to 3.8 mt/year last year, along with an estimated 600,000 tons of net primary metal exports. If the Shanghai Futures Exchange price falls further relative to its premium position to the LME, it may be that even the 15% export tax is not enough to keep production at home.

We speculated in our recent article on the true size of the western world aluminum supply deficit this year. HSBC put it at 1,077,000 tons last year, falling to 875,000 this year and 384,000 in 2016 with rising capacity utilization as capacity comes back online, and moderated demand growth.

Having mixed my metaphors at the start, I am going to make an equal hash of them at the close and say, of course, any such predictions assume the two 800-lb gorillas remain passive. The first gorilla is that excess Chinese smelter capacity remains locked up behind export tax rules and the second is the mountain of inventory held by the stock and finance trade remains, if not off-market, then only released to the market in a gradual manner. Both caveats, you will notice, have potential downside risk for the price, which is maybe why almost no one is bullish for medium-term, total-price prospects breaking toward $3,000/ton. This is in spite of the growth in aluminum demand being one of the most compelling stories in the non-ferrous market.