What The Economist Editor’s Departure Means for Us – And You 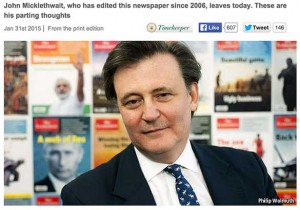 John Micklethwait, from whom several of us at this office have continuously received a regular email newsletter, left The Economist this week for greener pastures (if you consider Bloomberg‘s perch at 59th and Lex greener pastures…greener for his bank account, surely), and has outlined some notes for readers to consider.

We at MetalMiner have been fans of The Economist’s style and quirk as much as its content for a long time, and try to emulate the best and most interesting of what Micklethwait has done at his magazine (those Brits call it a ‘newspaper’), and adopt it for our readers.

That’s because the Economist is not really just a ‘Wall Street Journal’ (even though its writers and editors have deep subject-matter understanding of myriad coverage areas), nor is it solely ‘The Onion’ (even though its always-sharp headlines and commentaries flash with rapier wit), but synthesizes elements of both and everything in between.

In a sense, that’s what MetalMiner is out to achieve in our own industry. We’re certainly not the old guard when it comes to industrial metals media; yet we’re not just some cheeky new upstart – we know our stuff, and have the audacity to try and prove it to you if you work in metal sourcing and procurement.

When Micklethwait writes, “So any modern editor who is not paranoid is a fool” – he is certainly right. What with technology advancing, we know we have to double down on the best, most user-friendly ways to reach our audiences. When he writes, “On April Fool’s Day 2006, when, appropriately, I began this job, Twitter was ten days old, our print advertising was growing and social media was something to do with a very good lunch” – he has a great point. We must strive to keep perspective on what is coming down the pike. And when he writes, “But my optimism remains greater, both about The Economist and the future of independent journalism.”

Substitute “The Economist” with MetalMiner and “journalism” with metal market intelligence, and you’ll have a sense of our mission.

As the departing editor concludes, “In the end, free markets and free minds will win.” We couldn’t agree more. And we’re not going anywhere.

Give us a chance to show you why MetalMiner Membership matters.

PREVIOUS POST:
Why POSCO is Bullish on Its Indian Steel Investments
NEXT POST:
Rusal Will Not Reopen Closed Aluminum Smelters, Even if Prices Keep Rising