Recent reports might suggest it has all been slow going in China this last year but in some respect the country is steaming ahead. One area that has been busy is banking reform. “Yawn,” you might say, but this is actually good news. It might have a depressing effect on speculative commodity demand in the short term, but for the wider economy Beijing’s efforts to curb the shadow banking sector, in its various forms, have been making good progress.

As a result, it is believed the central bank could freed up to relax monetary policy this year without fear of undesirable consequences. This would mean growth in more or less unregulated lending. 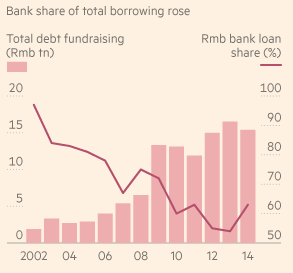 Non-bank lending, or shadow banking, has exploded in China since 2010. It is composed largely of a thick tier of riskier borrowers paying higher rates to a new, lightly regulated sector, according to the FT, and has raised the prospect of a wave of defaults as the economy slows. The FT reports data released last month by the People’s Bank of China shows that credit creation from all sources fell 6% in 2014 from a year earlier, only the third annual decline since collection of data on “total social finance” started in 2002.

As a result of Beijing’s relentless stream of regulations on the riskier off-balance-sheet financing market, more new credit has been channeled through banks, with local currency loans said to comprise 63% of all new credit last year. That’s the highest rate since the stimulus of 2009.

Among non-bank channels, corporate bonds, considered less risky than some forms of lending, rose to an all-time high of 23.8 trillion Yuan Renminbi ($3.8 TN) last year, or 15% of all new credit, according to the FT quoting PBOC data. Making bonds the economy’s third-largest source of credit, behind only bank loans and loans between companies. The value of trust loans, which had been the focus of concern over shadow banking because they delivered funds to property developers, local governments and other sectors that banks were trying to avoid, plummeted by more than two-thirds to 517 billion Rmb  ($83 BN), or 3% of all new credit.

As a result the PBOC has felt able to target monetary loosening, slashing interest rates late last year and twice injecting cash into the banking system last month. So far, the results have been mooted. China’s factory sector shrank in January for the first time in more than two years, after the economy’s weakest expansion in 24 years in 2014.

The government’s official manufacturing PMI fell to 49.8 in January, the FT said. That was down from 50.1 in December, and the first time since September 2012 that the gauge fell below the 50-point level. Among other sub-components of the survey, the FT reports imports tumbled by 1.4% to 46.4, reflecting weakening domestic demand. Input prices dropped 1.3% to 41.9 as energy and commodity prices continued their slide, a development that should have helped manufacturers margins if falling prices for finished goods hadn’t put them under pressure.

It is difficult to tell to what extent the clamp down on the shadow banking sector has added to the slowdown by restricting capital. It would seem from the switch to corporate bonds and the rise in peer-to-peer lending that it has had an impact but the ever resourceful Chinese have found ways around it. To the extent this has pushed lending back through the more regulated banking system this is a good thing but, as the FT points out, concerns remain about moral hazard in China’s debt markets amid the persistent assumption among investors that even high-yield debt enjoys an implicit government guarantee.

Technical defaults occurred on one corporate bond and several trust products last year but in each case investors were eventually repaid in full supporting the view at all levels in the market that Beijing will step in to save face in the system come what may.