An oft-requested feature, Sketch Tools now allow users to create new shapes to exacting measurements based on a PDF’s calibrated scale. The new tools give users real-time length and angle feedback as they sketch details with a mouse or enter dimensions using a keyboard. 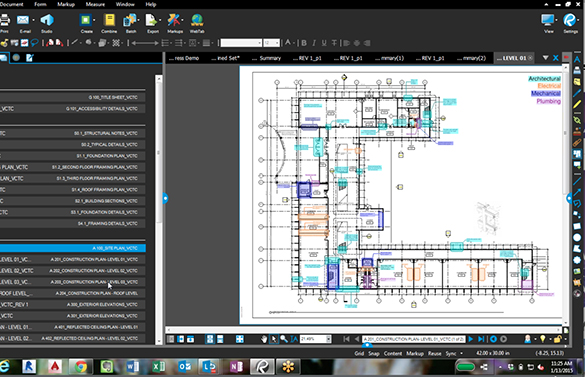 Also added in Revu 2015 is the Dynamic Tool Set Scaler, which enables markups to automatically resize precisely and proportionately when used on documents of different scales. Grouped markups in a drawing can also resize proportionately, regardless of scale setting.

Using Revu’s Camera tool, Capture 2.0 now allows users to embed videos into markups. Previously only image files could be embedded into markups in a PDF sheet set. Users can scroll through images and play back videos directly from each markup’s Capture viewer. Markups containing Capture media can be tracked and viewed in Revu’s Markups list and exported as a PDF Summary.

New in Revu 2015, Batch Slip Sheet (only in eXtreme edition) automates the process of keeping complex file sets up to date by allowing users to automatically match new file revisions with previous corresponding file versions. All markups, hyperlinks and bookmarks are carried over from revision to revision.

An existing Revu feature, Sets, which allows teams to navigate a large collection of various PDF files as if they were a single multipage document in a single tab, receives automation and categorization upgrades in Revu 2015.