Copper: What’s the Size of the Surplus?

The widely accepted narrative for copper is that we are in a state of oversupply, driven by an excess of concentrate and a cooling demand picture for refined metal. The relentless fall in the copper price is the strongest evidence of this. After a promising first half to 2014, the price had been on a steady downward trend from mid-2014 through to early 2015, as this Kitco chart illustrates. 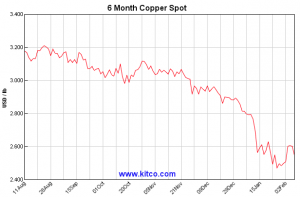 Yet at the same time, inventory levels, usually taken as an indicator of supply and demand balance, have been falling, as this graph from HSBC’s recent Global Metals & Mining Quarterly shows. In particular, the fall in LME inventories appears to suggest a very tight market. 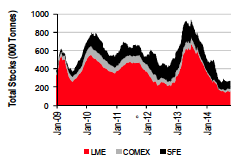 In reality, though, as Reuters observed last week, not all this metal is new deliveries. Last week, for example, 32,750 tons “arrived” in one day, with nearly 21,000 tons of it at one location. The simple answer is this was metal that was there already and was simply placed on-warrant from sitting in the same warehouse off-warrant previously.

In fact, this is just part of a trend that has been ongoing since the start of the year. The cumulative increase over the last 5 months of 2014 was just 30,825 metric tons, but since January, LME stocks have risen by 107,425 tons, or 61%. Therefore, do these inventory changes give us any clear indications of the underlying state of supply and demand?

No, they tell us a lot more about the speculative position-taking going on between dominant long position holders on the LME and bears looking to short the market, notably several Chinese hedge funds on the Shanghai Futures Exchange but no doubt some European parties too. The flows of inventory have more to do with covering short and long positions than a real market excess of material.

Indeed, a recent Commerzbank Report covered in Resource Investing News quotes data from the International Copper Study Group (ICSG), saying the global copper market was in a “seasonally adjusted deficit of 532,000 metric tons” for the first 10 months of last year. And while a surplus is predicted this year the demand picture is sufficiently robust and the supply side still sufficiently constrained that it is not going to be as large as most think.

HSBC puts the refined metal balance at 389 kt surplus this year, falling sharply next year to just 96 kt and rapidly deteriorating into nearly a half million ton deficit in 2017. Commerzbank also suggests the pessimism has been overplayed, listing several reasons why they feel the market has been oversold with price risk now more to the upside.

First, they cite the ICSG view of the market being in a seasonally adjusted deficit last year, rather than the surplus many had expected.

Second, the bank calls doubts on the expected level of surplus this year saying wage negotiations in Chile could provoke strikes and all miners have cut investment in response to prices falling to 5-and-a-half-year lows.

Finally, the bank calls falling Chinese demand into question, saying despite slower growth copper demand is robust and points to a recently announced $70 billion electrical infrastructure project as an indication that demand is not falling, even if it is rising more slowly than it was in 2013.

So ignore those exchange inventory levels, they are only a part of the inventory picture, anyway, don’t worry that the LME price is showing a contango with forward prices at a discount to spot. 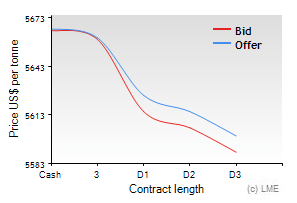 There will be volatility in the copper price this year as speculators with differing views of the future direction vie to make a buck. Consumers can’t play the short-term market based on fundamentals, our forecasting tools are a much more effective way to manage short-term price risk. For those looking to the medium-to-long term, the current excess of supply, such as it is, can only last so long. By next year prices are likely to be higher and, looking back, the current five-and-a-half-year low is very likely to be seen as more or less the bottom of a large, if shallow, trough.