Iron Ore is Under Pressure From Both Supply and Demand

Apart from an uptick in European steel prices in January the downward trend globally has continued as weak iron ore prices have allowed steel mills to chase the market down. The Steel Index’s (TSI) recent monthly Steel Review illustrates the trend graphically: 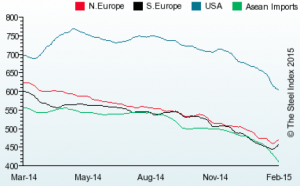 ArcelorMittal led the price increases in Europe with other mills following in their wake achieving a few Euros uplift in a slightly tighter market as distributors ran relatively lean in the face of softening demand. The hope in Europe is that a weakening Euro will boost exports, both for steel products and manufactured goods, but so far growth has success has been elusive amid considerable worry about a Greek exit from the Euro.

Meanwhile the rise in iron ore supply has been relentless, particularly from the Australian majors and Vale, while the fall in prices has been mitigated only by robust Chinese demand last year. China imported 86.89 million metric tons of iron ore in December, according to the TSI, narrowly making it the highest month on record. Australia’s share has increased during the last year as this graph shows: 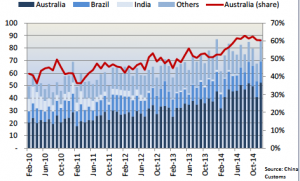 But the rate of supply increase is slowing as even the iron ore majors recognize demand is slowing in the face of a weakening steel market and there is only so much competitive capacity they can price out of the market.

Incremental production by the majors should peak at 71 mmt this year then ease off. HSBC’s estimates of global supply has been downgraded from 5.5% to 4.9% for last year and from 6.65% down to 5.5% for this year as investment has slowed and enhancement of brown-field resources has been favored over more costly green-field developments.

On the demand side global steel production is continuing to rise, in fact HSBC marginally upped its estimates for last year from 3.0% to 3.1% but 2015 iron ore demand is heavily dependent on a recovery in iron ore demand in China.

This graph from HSBC shows how global growth should, in their estimates, be more balanced in coming years with growth in North America and a recovery in Europe. The big unknown, however, is China.

In a recent TSI press release the firm said Chinese demand for steel continues to falter, reflected in an ongoing slump in finished prices. As a result mills continue to find themselves in the red, despite significant reductions in their costs from lower raw material prices. Unless, or until, there is some form of stimulus from Beijing it’s difficult to see this situation turn around in the short term suggesting, even with a moderation in supply growth, the Asian iron ore market will at least remain in surplus and iron ore prices will remain under pressure.

As expected, a proportion of Chinese domestic production has been closed as a result of low prices, but not as much as the majors had probably hoped. We will look to cover steel and coking coal in follow up articles this week as the markets are closely interlinked by similar supply and demand fundamentals.