Coking coal prices have suffered from many of the same dynamics as iron ore. Excessive investment in recent years has boosted supply, with more planned to come on-stream. Although some of those under development are expected to be delayed in 2015 due to current prices, others such as Mozambique where the completion of the Nacala corridor is expected this month, are set to add significant extra capacity.

The devaluation of the Russian Ruble has made Russian exporters more aggressive and the strong dollar generally has helped compensate miners for the lower prices. Even so HSBC estimates that at $117/mt benchmark coal some 35% (around 108 million tons) of global and 65% of US seaborne supply is losing money and that some 51 mt (30%) of Australian capacity is under strain. Indeed Australian miners have already been asked to take a 38% pay cut at the Griffen mine and adhere to a 35-hour work week slashing weekend supplements and overtime. Further closures and curtailments, particularly in the US, are likely this year. 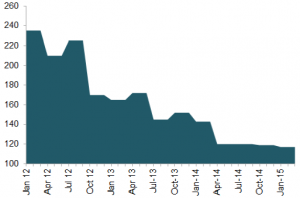 Demand is not likely to come to the rescue. Crude steel production growth is possibly going to be no more than 1.1% this year with short term restocking providing only a temporary relief to miners in terms of volume.

European, Japanese and Indian steel producers have taken the opportunity of lower prices, aided in part by cheaper bulk sea freight rates,  to restock in recent months and volumes picked up as a result but Chinese demand continued to fall. With both coking coal and iron ore prices so weak there is little to support steel prices.

A number of asset divestitures by major miners of minor stakes leads some to suggest we may be seeing a bottom. Merger and acquisition activity sometimes picks up as smaller players see an opportunity to take over assets being dumped by majors as non-core, but a return to the heady days of the super-cycle is not expected by anyone.

HSBC sees moderate price growth in the face of a slow recovery in steel prices over the next few years, but there will be a rebalancing of supply options as continuing low prices result in global rationing.