Whether you are a fully signed-up member of the Armageddon-is-just-around-the-corner-due-to-global-warming camp or a complete naysayer is, with all due respect to most of us in either camp, irrelevant.

The point is those that form policies and pass laws on the whole a) accept climate change due to human activity is a real and present danger to the future of life on earth and b) have on the whole been totally incapable of taking any action that will have the impact they (mostly) agree is needed. The reason is not hard to see, the consequences are long term, the costs are short term, and politicians work very much in the here and now. Or at least with the limited horizon of the next election. As a result (and it doesn’t make the above point, its far too diplomatic) BP’s latest long range energy report this week makes disturbing reading for anyone other than those in the complete naysayer camp.

Population growth and increases in income per person are the key drivers behind growing energy demand, the report states. By 2035, the world’s population is projected to reach 8.7 billion, which means an additional 1.6 billion people living and working here will need energy. Over the same period, GDP is expected to more than double, with non-OECD Asia contributing nearly 60% of that growth. Globally, GDP per person in 2035 is expected to be 75% higher than today. With higher GDP and a higher population, energy consumption is going to be much, much, higher, even with improvements in technology and behavior moderating the rise.

Bob Dudley, BP’s chief executive, is quoted as saying: “The most likely path for carbon emissions, despite current government policies and intentions, does not appear sustainable. The projections highlight the scale of the challenge facing policy makers at this year’s UN-led discussions due for December in Paris. No single change or policy is likely to be sufficient on its own.” 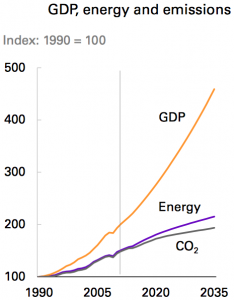 He went on to say that only by all parties agreeing to a global carbon price could a mix of policies have a meaningful impact. Renewables are not in themselves anywhere near enough of a sufficiently attractive solution to take over as the primary energy source in BP’s estimation. To be fair, this probably isn’t a case of “well they would say that wouldn’t they” – the fact they project such a low uptake is itself a boost to the opinion that significant action is required.

This graph illustrates the extent to which the oil company sees renewable energy sources having a meaningful impact in the years ahead. 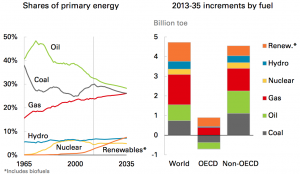 Although coal and oil will decline relative to other energy sources the three carbon fuels will still dominate the supply market down from 86% now to 81% by 2035 – not exactly a low carbon future.