Home | Commodities | Week-in-Review: Kicking the Carbon Can Down the Renewable Road
Commentary

Week-in-Review: Kicking the Carbon Can Down the Renewable Road

With base metal prices down and oil, while recovering a bit, still far below its 2014 highs, more trucks and SUVs are being purchased and the cost savings of even the most proven renewable technologies, such as roof-mounted solar panels, isn’t the savings it was just a few months ago.

Free Download: Automate Your Trades to Save on Trade Deals

Yet, much of our coverage was devoted to renewables this week. BP released its Energy Outlook 2035 and the predictions were, well, not good.

By 2035, the world’s population is projected to reach 8.7 billion, which means an additional 1.6 billion people living and working here will need energy. Globally, GDP per person in 2035 is expected to be 75% higher than today. Although coal and oil will decline relative to other energy sources the three carbon fuels will still dominate the supply market down from 86% now to 81% by 2035. Renewables, as we now know them, will barely make a dent. Bummer.

Well, perhaps the answer to our climate change problems can come from better building codes that cut down on energy consumption from the supply side. This week, we learned that the American Society of Heating Refrigeration and Air-Conditioning Engineers would take up the proposition of including the use of biomass – such as burning wood or other renewable heating fuels – for building operations will be recognized in a new green building standard.

Hmm, if we’re still at the point of deciding if wood is better to burn than fossil fuels I don’t think building regulations are going to be where we need them to be by 2035 when our 1.6 billion friends are coming over. 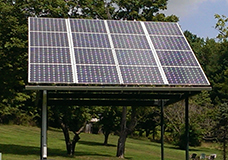 This solar panel can’t do it all himself.

Maybe we’ve been looking at this thing the wrong way. Maybe our existing renewables, such as solar and wind, will just become so much more economical than coal or oil  that everyone will switch well before 2035. Oops, coking coal and iron ore are at historic price lows right now. Well, maybe in a few years.

What about the developing world? Can’t they avoid the mistakes we made in making our economies dependent on dirty power sources by being green from the get go? While we did report that India picked Adani Enterprises this week for its 10-gigawatt solar park, it might not be best to put all our eggs in the developing world’s basket. The world’s largest democracy also began auctioning coal blocks to industry this week. While China’s steel industry claims to have peaked this week, it’s obvious that it’ll require more investment for modernization. Plus, fireworks were banned from many cities Chinese New Year celebrations this week because of how dirty the air in steel-producing regions currently is.

Seems like we’ve still got a lot of work to do to meet our emissions cutting standards.