PwC Report: $172 Billion in Global Construction Mergers and Acquisitions in 2014

PricewaterhouseCoopers’ final 2014 quarterly analysis said the engineering and construction industries made 964 deals in mergers and acquisitions in 2014 worth more than $172 billion. Three times more than 2013’s total of $55 billion.

The overall total of mergers and acquisitions was lower than the 10-year high set in 2007, but engineering and construction posted a 25% increase in deal volume over 2013. There were four deals in the fourth quarter of 2014, alone, that were valued at more than $1 billion. Overall, there were 21 deals in 2014 totaling the $172 billion. Most deals took place in Asia and Oceania. 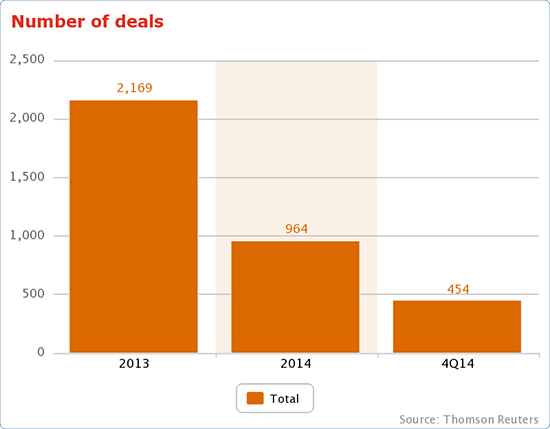 Escalation of engineering and construction deals in 2014. Source: Thomson Reuters.

Some of the highlights of the report:

— The industry continues on a path toward full service integration, which has been a central theme of acquisition activity. Multinational clients are
‘rationalizing’ vendors, choosing firms that can perform end-to-end service while firms are looking to leverage higher value added services, such as design.

— The near-term economic outlook continues to favor the United States, but emerging markets remain the engine of long-term global growth. Potential acquirers have become more selective as new baseline growth rates in emerging markets are established but should remain focused on the longer-term megatrends.

— Sales of commercial and residential buildings as well as development property continue to decline in China. The apparent oversupply in the building
materials sector will continue to drive consolidation in the region.

— Financial investors have shown interest in the sector as evidenced by their participation in several megadeals. They have shown particular interest in the
European region on the expectation of finding undervalued assets after years of subdued earnings.

Joint Venture Activity on the Rise

— The skilled labor gap is emerging as a major theme as companies struggle to fill talent needs, particularly in skilled areas such as engineering and design. As companies look to invest in growth, talent considerations will become a more critical consideration in merger due diligence.

As buildings go green, so do Engineering and Construction Companies

— With increasing regulatory pressure, the focus has intensified on sustainable and green construction, supporting the overall reduction in carbon footprint. The acquisition activity is expected to gain momentum in this space, with large firms eyeing niche companies specializing in sustainable development.